During the historic first Arya Kshema Winter Dharma Gathering for Kagyu nuns the Gyalwang Karmapa offered eight days of dharma discourses, interspersing his teachings with frank and well-researched advice on the important issue of full-nun’s ordination in Tibet (known in Sanskrit as ‘Bhikshuni’ ordination and in Tibetan as ‘Gelongma’ ordination).

Citing little-known textual descriptions, the Gyalwang Karmapa related accounts of thriving nuns’ communities—including many fully ordained nuns—in central areas of Tibet several centuries ago. However, such communities have disappeared and today there is no full ordination offered to nuns within the Tibetan tradition.

Teaching primarily to around 207 nuns from six Kagyu nunneries who took part in the Arya Kshema Gathering, the Gyalwang Karmapa also opened up the teachings to the general public, with many Tibetan and foreign lay people filling the gompa. A number of respected Geshes, Khenpos and other monks also took part.

As each teaching session began, those gathered enjoyed the rare sound of a female umze or chantmaster leading the nuns, monks and laypeople through the opening prayers, the female voices ringing strong and clear. They also welcomed the sight of nuns escorting the Gyalwang Karmapa into the gompa with traditional gyaling horns and incense, while female disciplinarians oversaw the rows of nuns sitting on raised cushions, their backs straight and true.

Welcoming them on the first morning of teachings, the Gyalwang Karmapa first explained the name of the Arya Kshema Winter Dharma Gathering.

“It is said that among the female disciples of the lord Buddha, the one with the greatest wisdom and greatest confidence was named Arya Kshema. This shows that female monastics were the same as male monastics, and were able to achieve the highest realization,” the Gyalwang Karmapa explained. “But the most important thing is that in this day and age, women monastics are indispensible for upholding the Buddha’s teachings.”

The Gyalwang Karmapa then explored the origins and history of the female monastic community in Tibet—observing that while parts of this history may not be well-known, they are nonetheless very important.

He began by demonstrating clearly and unambiguously that the Bhikshuni sangha previously existed in Tibet, referring to particular historical documents that contain evidence of this.

The first seven men took ordination in Tibet during the reign of King Trisong Detsen. And, the Gyalwang Karmapa explained, the female monastic sangha was also initiated at that time.

Moreover, the histories show clear examples of many nuns in Tibet who received the Bhikshuni or Gelongma ordination, while there are documented cases of such great lamas as Shakya Chogden, Bodong Chogle Namgyal and the 8th Karmapa Mikyö Dorje conferring full ordination to women.

“If we look at the histories of the family lineages of the Sakya tradition, then there are stories about how the daughters of some of the great Sakya lineage holders took the Bhikshuni vows. It is also recorded in history that the sister of the great translator Rinchen Zangpo became a Bhikshuni. It seems fairly clear that at that point there was either a living tradition of conferring the Bhikshuni vows, or there was another manner of conferring the vows.”

“Likewise, in the histories of the lama Yeshe Ö who exerted power over the areas of Ngari, some documents show that if the wives of the kings—as well as women from both higher and common classes of society—wanted to take the Bhikshuni vows, they were allowed to. These documents exist, and I have seen them,” he said.

The Gyalwang Karmapa then cited texts indicating that during the time of the 10th Karmapa, in the central areas of Tibet in fact more nunneries existed than monasteries. In the 17th century the nun’s community was evidently thriving, he told those gathered.

“Now, history such as this may not be very well-known, but it does exist. These stories are true. In the old times in Tibet there was a thriving community of nuns who had opportunities to study, listen and contemplate, and to practice meditation. There were many yoginis and other great nuns who achieved realization and accomplishment through their practice. Whether or not these stories are well-known, we do know that this was the case.”

“It is important for us to have the Bhikshuni sangha. This is something that His Holiness the Dalai Lama has put much effort into, and also great scholars from all lineages have taken a keen interest. There has been a lot of discussion over this issue. Several conferences have been called—in fact, these conferences have been going on since well before I came to India.”

Next the Gyalwang Karmapa discussed some of the scriptural reasons why it is important to have a Bhikshuni sangha, and their valuable role in fully upholding the Buddha’s teachings.

According to the lamrim definition of a precious human rebirth, the presence of Bhikshunis is needed for a land to be considered a ‘central land’, he explained. Whether a place is a ‘central land’ or not depends on the presence of the four circles of disciples—fully ordained monks, fully ordained nuns, male lay precept-holders, and female lay precept-holders—that are like four pillars holding up a house. And yet, in the Tibetan tradition one of those pillars is missing as there are no fully ordained nuns.

The Gyalwang Karmapa then raised another important reason why the Bhikshuni sangha is important. Without it, he explained to those gathered, it becomes very difficult to give any level of ordination to women that is 100% free from dispute—including the novice or Getsulma ordination.

“If we have a Bhikshuni sangha then we can give undisputed monastic vows, but otherwise it will be difficult for us to give any monastic vows that are 100% free of dispute. So this is another important reason for the Bhikshuni ordination.”

Finally, the Gyalwang Karmapa once more highlighted the importance of the issue, and how responsibility now rests upon the entire sangha in addressing it.

“We need to understand that the situation now with Bhikshunis is an important issue. Some people think that there have been some foreign nuns who’ve come over and started making an issue out of it and it’s only then that the Bhikshuni issue has become an important question, and that before it wasn’t important. But that is absolutely not the case. The fact that it was not an important issue for us before is our fault. It’s our problem, and it’s us not living up to our own responsibility. And this is for monks and nuns both—we have both let this slide, so it is all of our responsibility.” 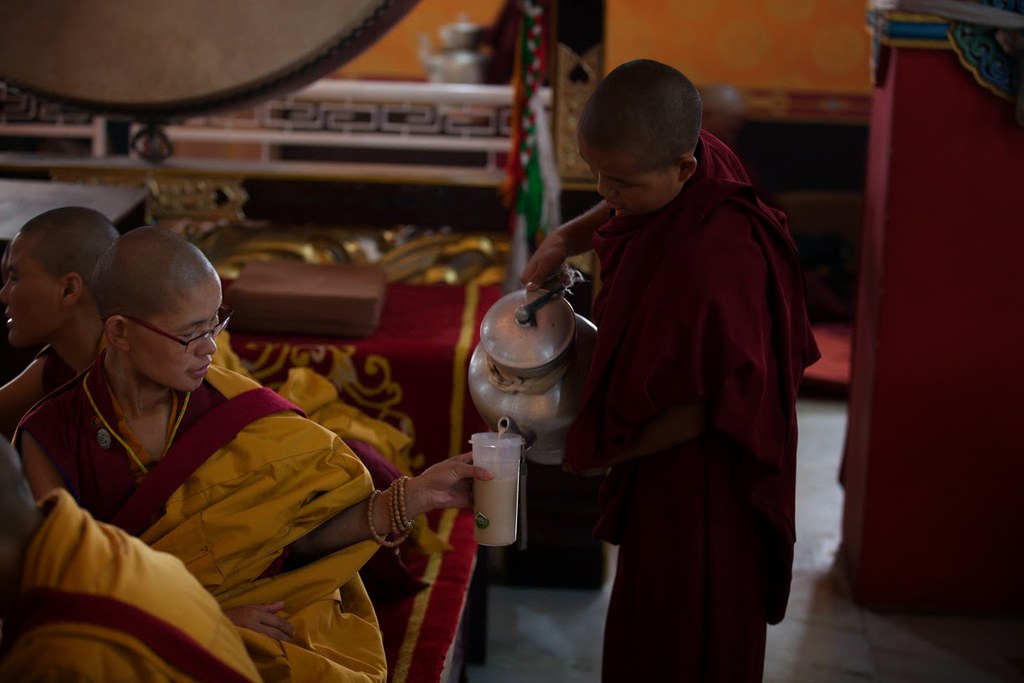