Cultivating the Delight of Rejoicing and the Freedom from Prejudice

On this last day of teachings on Gampopa’s Ornament of Precious Liberation, the Gyalwang Karmapa completed the reading transmission for the section of Preparation, which included rejoicing, requesting the buddhas to turn the wheel of Dharma, supplicating them not to pass into nirvana, and the dedication. The Karmapa noted that Chapter Nine is the longest in the text and that he would teach the actual ceremony for generating bodhichitta later.

The Karmapa explained that we rejoice from the depth of our heart in the virtuous activities from the past, present, and future that anyone has performed: the buddhas of the ten directions, all the bodhisattvas, the self-realizing buddhas, the listeners who are on the paths of learning and nor more learning, and all individuals who have not entered the path. This rejoicing should be free of envy or it could be understood as nonconceptual. The benefit of rejoicing, the Karmapa explained, is to increase our own accumulation of virtue and also our delight in virtue itself. The Karmapa commented that rejoicing is a wonderful skillful means found on the path of the bodhisattva.

The Listeners and Solitary Realizers, the Karmapa explained, have an intense wish for liberation from samsara and so they are able to release the bonds that tie them to it. This is not easy to do, he remarked, because the habits that bind are present from beginingless time, so we should see their liberation as wondrous and rejoice in it. Although ordinary individuals are bound up in their afflictions, they still can give rise to virtuous thoughts, even as small as offering a handful of food to an animal, so we should rejoice in this as well. All of these various types of virtues are as vast as the sky and we rejoice in all of them. The Karmapa added a caution here: If we are pleased by the suffering of people we consider enemies, that is the reverse of true rejoicing.

The Karmapa related a story about rejoicing that involved the king Prasenajit, one of the Buddha’s great benefactors. The king was offering food for seven days to the Buddha and a large gathering. The Buddha asked the king, “On behalf of whom shall I dedicate the merit of this offering? The one who made the greatest material offering? Or to the one who has the greatest merit?” King Prasenajit replied, “To the one with the greatest merit.” And so for six days, the Buddha dedicated the merit to an old lady who was greatly rejoicing. This disturbed the king’s ministers no end, and so they contrived to distract the old lady on the last day. They were successful and her mind was so filled with various thoughts that she forgot to rejoice so the merit was dedicated to the king.

The Buddha then counseled him, “You are a king and have much to do. It will be difficult to study all the six Perfections, but you can rejoice in virtue and offer this rejoicing to all the buddhas and bodhisattvas and then dedicate it to all living beings. Make rejoicing your practice, and you will become enlightened.” “If we really rejoice,” the Karmapa commented, “it will naturally delight our minds. This capacity to rejoice is a jewel treasury that we all naturally have.” If we are preoccupied with things and thoughts, however, like the old lady, we will not be able to rejoice.

When the Karmapa turned to the fourth point of Preparation, requesting that the wheel of Dharma be turned, he discussed the importance of being free of bias in relation to any of the Buddha’s teachings; we should not cling to one and look down on others. There are some slight differences in tenets and ways of practicing in the different Tibetan schools, he noted, but in actuality they are essentially the same. For this reason it is important to look at them without attachment, aversion, or bias. The Karmapa quoted a verse from the first Dalai Lama Gendundrup (1391–1475) stating that there are many who consider themselves upholders of the teachings but also think of others who uphold the teachings as their main enemies. The Karmapa lamented that this is a very sad and distressing situation.

To illustrate how it should be, the Karmapa spoke of Atisha’s teaching known as carrying the four corners of the teachings onto the path. The Karmapa explained this as freedom from bias towards any aspect of the teachings and gave the classic analogy of four people holding up the four corners of a blanket, making it easy to lift. He commented that Atisha may have been recalling the situation at the monastic university of Vikramalashila, where all the schools of Buddhism treated each other with mutual respect.

The Karmapa gave another example illustrating how important and necessary all traditions of Buddhism are. Imagine, he said, a large copper vat filled with milk. It takes four people to lift up, using their strength equally so that the milk does not spill out. There may be some little difference between the four people but basically they are the same. Nevertheless, the Karmapa explained, if one of the four could not carry their side, the milk would spill out. And it would go out even faster if one of the four thought they could do the lifting on their own. So the four need to cooperate in the project of lifting the vessel, which the Karmapa explained as an analogy for the Buddha’s teachings being carried by different traditions. If one side tried to carry the entire vat and spilled the milk, the whole of Buddhism would be diminished; if even one of the other schools disappear, it means that Buddhism is disappearing, so everyone needs to work together. In sum, he said that if the teachings, which are the antidote for our afflictions, become the cause for afflictions to increase, we are finished, so we should consider this carefully.

The Karmapa noted that the fifth point of the Preparation, supplicating the buddha not to pass away from the suffering world, and the sixth point of dedication are short and clear in Gampopa’s text and do not really need commentary. After giving a reading transmission for the Third Karmapa’s Mahamudra Prayer, which has been recited daily, the Karmapa closed by emphasizing the importance of both study and practice. During the Arya Kshema Winter Gathering, the nuns engaged primarily in study, he said, and they also made the offering of practice to please the buddhas and bodhisattvas. Some think, the Karmapa noted, that study and practice are somehow separate or that one is better than the other, but he affirmed that the purpose of study is to be able to practice, and practice helps when we study and contemplate; the two are inseparable. 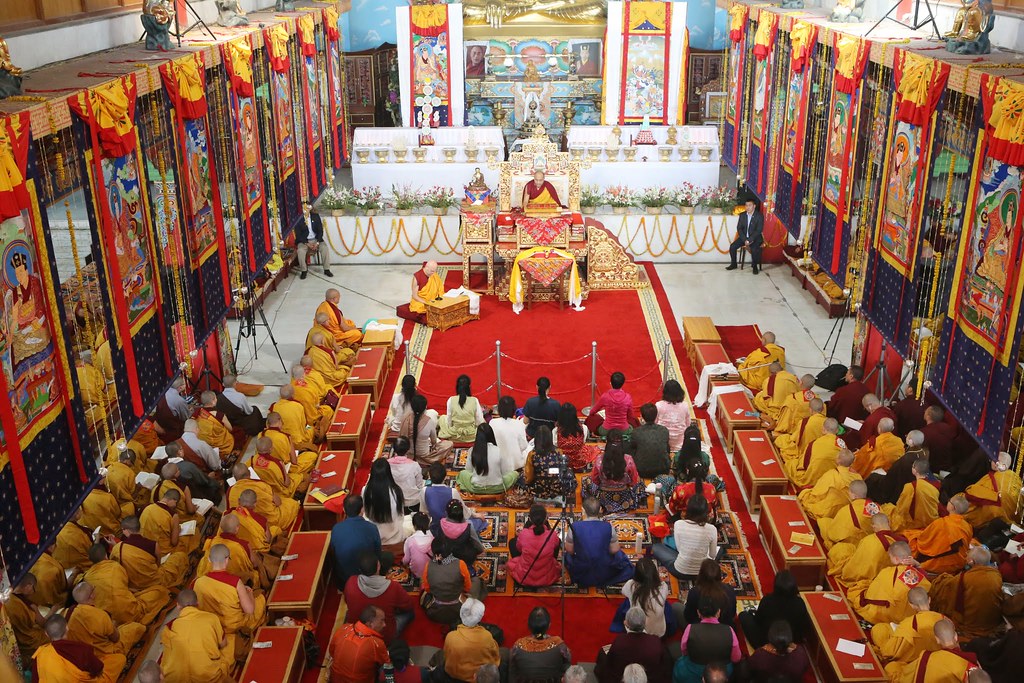