Today the shrine in the main hall at Tergar Monastery was again transformed, this time for three days (January 26–28) of practicing the Karma Pakshi Guru Yoga in the morning and in the afternoon, the offering ritual to the Five Tseringma (Long Life Sisters). In the new setting, which the Karmapa had arranged the night before, two shrines filled the central space of the shrine stage. On the right was a long, embroidered thangka of Karma Pakshi, flanked in brilliant white scarves, which brought alive the rich colors in the image of this Second Karmapa along with his yidam deity and main disciples. Two large tormas (offering sculptures) were set beneath it, and the lower one had a skull cup and butter lamps on either side. The final row held beautifully embossed gold and silver offering bowls, their generous size filled with the traditional substances.

On the left was displayed a lovely thangka of Tseringma, painted in the spacious style of the Karmapa’s Encampment with an unusual, dynamic and flowing line for the images. In front of this tall image was a torma painted in light turquoise with mountains, flowers, and floating clouds to evoke the place where Tseringma stays. On either side of this were skull cups and rows of butter lamps while below, another row of the traditional offerings completed the picture.

In between the two thangkas and set on the main floor was the Karmapa’s golden throne. On the ornately carved table on his right resided a large statue of a radiant Milarepa, his right hand resting on his knee and the left holding a skull cup filled with nectar. Next to him was a tall long life arrow with the ribbons of the five colors of the elements and of the five Tseringma as well.

After the Karmapa took his seat on the throne, the Karma Pakshi Guru Yoga began. The essence of this practice came to Yongey Mingyur Dorje in a vision of Karma Pakshi and his retinue. It was especially appropriate and auspicious to be doing this practice in Mingyur Rinpoche’s own monastery. The sadhana is widely practiced in the Kagyu tradition and contains profound teachings on the nature of the mind, such as a teaching from one of the female figures in his vison: “Kye Ho! Self-aware wisdom is beyond expression. The world of attachment appears from the radiance of mind itself.” This underlying current of Mahamudra realization surfaces throughout the practice, such as at the end, when practitioners are advised, “In post-meditation, all the diverse appearances of samsara and nirvana / are the great, transparent and unceasing play of creative energy itself.”

The afternoon brought an extensive practice of the Five Tseringma, who are protectors of the Kagyu lineage and Tseringma also functions as a yidam and a lama. They have a special connection with Milarepa, whose dialogues with them are famous. Earlier the Karmapa had explained that during the time of his previous incarnations, this practice of Tseringma was performed extensively at his seat of Tsurphu Monastery in Tibet. The practice was considered as important as other extensive practices (drupchen) of major deities. The Karmapa commented that Tseringma was a protector of all the Kagyu lineages, and she was also closely connected to Milarepa, who said, “In the human realm, my teachings are held by the Teacher from Central Tibet (Gampopa). In the non-human realm, they are held by Tseringma.” Further, as one who holds the teachings of Milarepa, the Karmapa continued, Tseringma was also a lama who gave teachings to previous Kagyu Lamas such as Yang Gonpa (1213–1258/87) and the First Karmapa Dusum Khyenpa (1110–1193).

This year the Tseringma puja will be held for three days and the Karmapa voiced the hope that in the years to come, the nunneries would engage in the extensive practice of Tseringma every year. There is also a rarely performed wealth ritual written by Jamgon Kongtrul Lodro Thaye, he said, which the nuns will begin next year. The practice of Tseringma is also, and especially, a long life practice as well as being an aid for keeping pure discipline. This year, the Karmapa explained, the reason to do the practice is for the long life of H.H. the Dalai Lama, who seems pleased about this, so the Karmapa asked everyone to do it as carefully as they could. 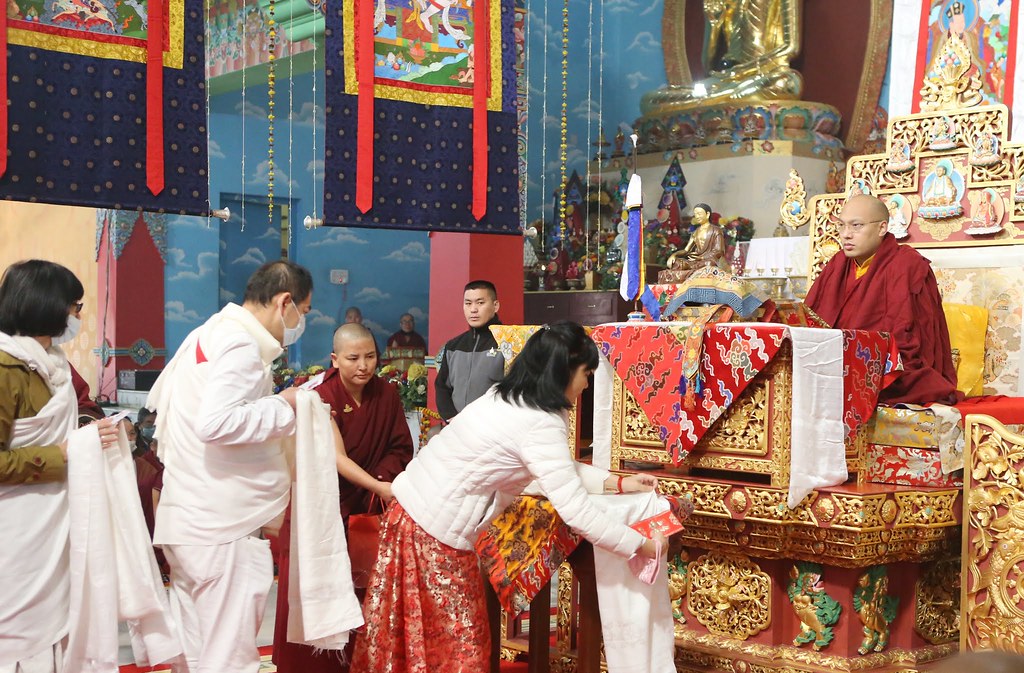