On a warm and sunny day, unusual for this time of year, the Third Arya Kshema Winter Dharma Gathering began with the Gyalwang Karmapa entering the main shrine hall at Tergar Monastery and offering three prostrations to its golden Buddha and to the life-like statue of the Sixteenth Karmapa resting on a throne on front. The hall itself was filled with over 410 nuns attending from nine nunneries in Nepal, India, and Bhutan. The sides of the hall were lined with observers including many nuns and lay women from all over the world. The webcast in English, Chinese, and Spanish made this morning’s session available to more than two thousand listeners.

The participants have come to hear the Karmapa teach every morning for fourteen days on Gampopa’s Ornament of Precious Liberation; they are seeking to improve their debating skills through daily teachings and practice; and, on top of daily observances, they will participate in four days of sadhana and ritual practices: White Tara Who Bestows All Siddhis; Karma Pakshi Guru Yoga; Offerings to the Five Long Life Sisters (Tseringma), and the extensive Chӧ Ritual, A Garland of Jewels, composed by the Third Karmapa Rangjung Dorje. On the last day, February 3, the nuns will engage in a closing formal debate. Further, on an astrologically auspicious day, they will perform a special puja for the flourishing of the nuns’ Dharma.

This full program of study, practice, and debate embodies the Karmapa’s wish that the nuns engage and become skilled in the three trainings of discipline, meditation, and wisdom. As he has said in the past, “I think it’s important for me to do everything I can to support the nuns’ teachings and practice, to help them develop their listening, contemplation, and meditation. So from the bottom of my heart, I want to put as much effort into this as I can. This is appropriate for me to do from now until the end of this lifetime as it fits well with the activities of the previous Karmapas, and it’s also clearly necessary in our contemporary society.”

Today, the nuns’ chanting began appropriately with the Heart Sutra and its praise of the Great Mother:

The Perfection of Wisdom beyond speech, thought, and expression,
The very essence of space unborn and unceasing,
The realm of experience for wisdom aware of its nature
To the mother of the buddhas in all three times, I bow.

Following an extensive mandala offering to His Holiness and his personal prayers, he began with thanks to everyone who had come from near and far and also expressed his appreciation to those who had made the gathering possible. He praised the nuns for their rapid improvement in the short time of two years and expressed his gratitude to them and their teachers for their interest and enthusiasm.

The Karmapa began today’s teaching on The Ornament of Precious Liberation with Chapter Nine, The Proper Adoption of Bodhicitta. He gave a reading transmission for its first pages on the essential nature of bodhicitta, and following a tea break, he began his explanations.

The reasons for studying this text are quite clear, he stated: we are followers of the Dakpo Kagyu, Gampopa’s own lineage (he is also known as Dakpo Lhaje, the Physician from Dakpo). Further, as he was about to pass away, Gampopa said to his disciples, “You all might be thinking, ‘People in the future will not be able to meet him.’ However, I have written texts, such as The Ornament of Precious Liberation and The Precious Garland of the Supreme Path. Studying them is no different from meeting me.”

The Karmapa continued to explain that the Dakpo Kagyu lineage is known as the confluence of the Kadampa tradition and Milarepa’s Mahamudra lineage; these two do not contradict each other and Gampopa taught them free of error. “These days, however,” the Karmapa added, “we do not pay much attention to the Kadampa side of the tradition and tend to forget their teaching on the three types of individuals. Yet Gampopa stated that his ability to benefit living beings was due to the kindness of the Kadampa.”

If we skip over these preliminaries or the common path, the Karmapa cautioned, and jump into advanced teachings like mahamudra, it will be quite difficult for our mind to be benefitted by them. “So we begin with the training in the three types of individuals,” he counseled, “and gradually work with our mind, improving ourselves to the point that we are well prepared to enter Mahamudra practice.” This way, he noted, the Dharma will function as Dharma (the second of Gampopa’s Four Dharmas).

The Karmapa then turned to Chapter Nine, The Proper Adoption of Bodhicitta, explaining that bodhicitta is the gateway to the mahayana: “Whether or not we have entered the mahayana depends on whether or not we have generated bodhicitta, which is indispensable. In the very beginning, we must have it and with it we can do everything.” He continued, “We should develop full certainty, unshakeable belief, that this is true by studying the scriptures, engaging in the logic, and thinking about the analogies.”

The Karmapa then spoke of the scriptures and first gave the condensed meaning of two important sutras. In The Purity of Maitreya Sutra, it is said that bodhicitta resembles a diamond: it does not change and, even if it were broken into fragments, they would be more brilliant than other jewels. The sutra also states that when bodhicitta has arisen within, without doing other practices, it can become a cause for full awakening. In the Gandavyuha Sutra, it is said that bodhicitta is the seed of all the Buddha’s qualities.

As for the treatises, the Karmapa explained that in Maitreya’s famed Ornament of Realization, the point about bodhicitta is the very first of all the seventy points that make up the text. Chandragomin speaks of bodhicitta as the path to happiness and the basis of the Mahayana in his Letter to Disciples. The great Tibetan masters from the past taught in their key instructions that if we have the wish for emancipation and bodhicitta that are stable and developed within our being, all our virtuous actions will become a cause for omniscience. Some masters add that bodhicitta is not only the gateway to the mahayana but also the entrance to the tantra of the mahayana as well. The Karmapa stated that in reflecting on these citations from the Buddha’s sutras, Indian masters’ treatises, and the writings of the Tibetan realized lamas, we can become certain that we could not do without bodhicitta.

The Karmapa then turned to indicating through logic that bodhicitta is the gateway to the Mahayana and gave several reasons. First, from the moment we generate bodhicitta, no matter what other qualities we might have, we have become a Mahayana practitioner, he said, and we are counted among the ranks of the bodhisattvas even if we do not engage in the conduct of a bodhisattva. Second, if we lose our bodhicitta, he cautioned, no matter what other qualities we might have, such as an understanding of emptiness, we descend to the level of the foundational vehicle, so the moment we are separated from bodhicitta, we have lost the mahayana path.

“What these reasons show us,” he said, “is that it is not enough for the Dharma to be the mahayana Dharma. It is important that individuals themselves enter the Mahayana.” With a mere understanding of bodhicitta, he noted, we will remain in a mere understanding of the mahayana. With authentic bodhicitta, our practice will be authentic Mahayana practice. “True bodhicitta,” he stated, “is the touchstone that determines whether or not we are real mahayana practitioners.

The major philosophical texts give long explanations of bodhicitta, the Karmapa noted, and there is much to understand from them, but for the sake of practice, an abbreviated definition is probably more useful. As he defined it, “Bodhicitta relates to our individual capacity, our mental strength or willingness, to take on responsibility for the sake of others.” We can say that we are Mahayana practitioners, he continued, but that does not really make us so. What does, he said, is our enthusiasm and ability to bear the responsibility of helping others. We should look to see if we have this or not. If we do, he explained, only then do we belong to the Mahayana.

The “maha” of mahayana means “great” or “big,” the Karmapa explained, but usually our bodhicitta is too small. To work for all living beings is not easy, he said, for it is hard to help one being to say nothing of all of them. “‘All living beings’ may sound impressive when we say it,” he cautioned, “but our minds cannot encompass the idea.” We may think to ourselves that we are doing quite well, but actually, he noted, we are not as great as we think. Forget about offering the ultimate benefit, it is even difficult to help on a relative level, he said.

What we can do, he advised, is train our minds to become strong so they can take on increasingly greater responsibility. This is the purpose of the well-known practices of mind training (lojong) and the graduated path. The Karmapa compared this training to that of developing physical strength. We start out lifting three, four, or five pounds, then eighteen and so on, gradually building our strength so that we can finally press a hundred. Similarly, there are the mental stages of daily practice that develop our bodhicitta and increase our ability to help others.

The Karmapa then told a story about a Tibetan who had a doubt about the practice of Sarvavid Vairocana (Kunrik in Tibetan). In old Tibet, he related, this was a popular text for purifying the lower realms so when a ritual was requested for the deceased, it was usually the Sarvavid so almost everyone had the text. The questioner asked the lama whether this practice belonged to the foundational vehicle (hinayana) or to the great vehicle (mahayana).

The lama replied, “In general the text, of course, belongs to the mahayana since it is a practice of the secret mantrayana.” However, the lama was clever and looking carefully at his questioner, he said, “But for the two of us the practice belongs neither to the great vehicle nor even to the foundational one.” The Karmapa explained, “Whether the Dharma we are practicing is the mahayana Dharma or not depends on whether the individual is really practicing the mahayana. So it is not just a question of the Dharma itself, but it depends on the individual practicing it.”

Then the Karmapa shifted the question: “If we asked that lama about the Dharma we have been practicing up to now, what would he say?” If the lama replied, “It’s not the greater or the foundational Dharma,” that would not be too bad, the Karmapa remarked, but if he said, “It’s not Dharma at all,” that would be problematic. So we must ask ourselves, the Karmapa said, “Is the Dharma I’ve been practicing up to now, the actual, true Dharma? Has the Dharma become the Dharma?” It’s not easy to answer this, the Karmapa said: “We should not be satisfied with the mere appearance of the Dharma, with a practice that reflects local customs, or one that is a fake in some other way. We have to look at ourselves and see if we can engage in actual practice, in the real thing, in what’s authentic.” With this probing question, the Karmapa ended the teachings on this first day. 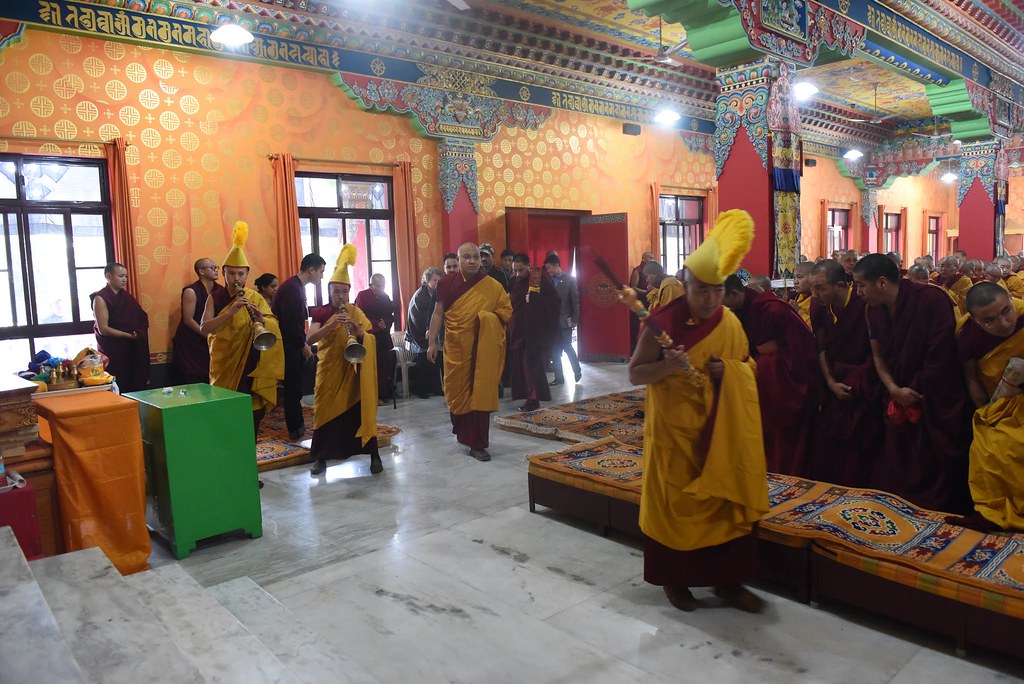