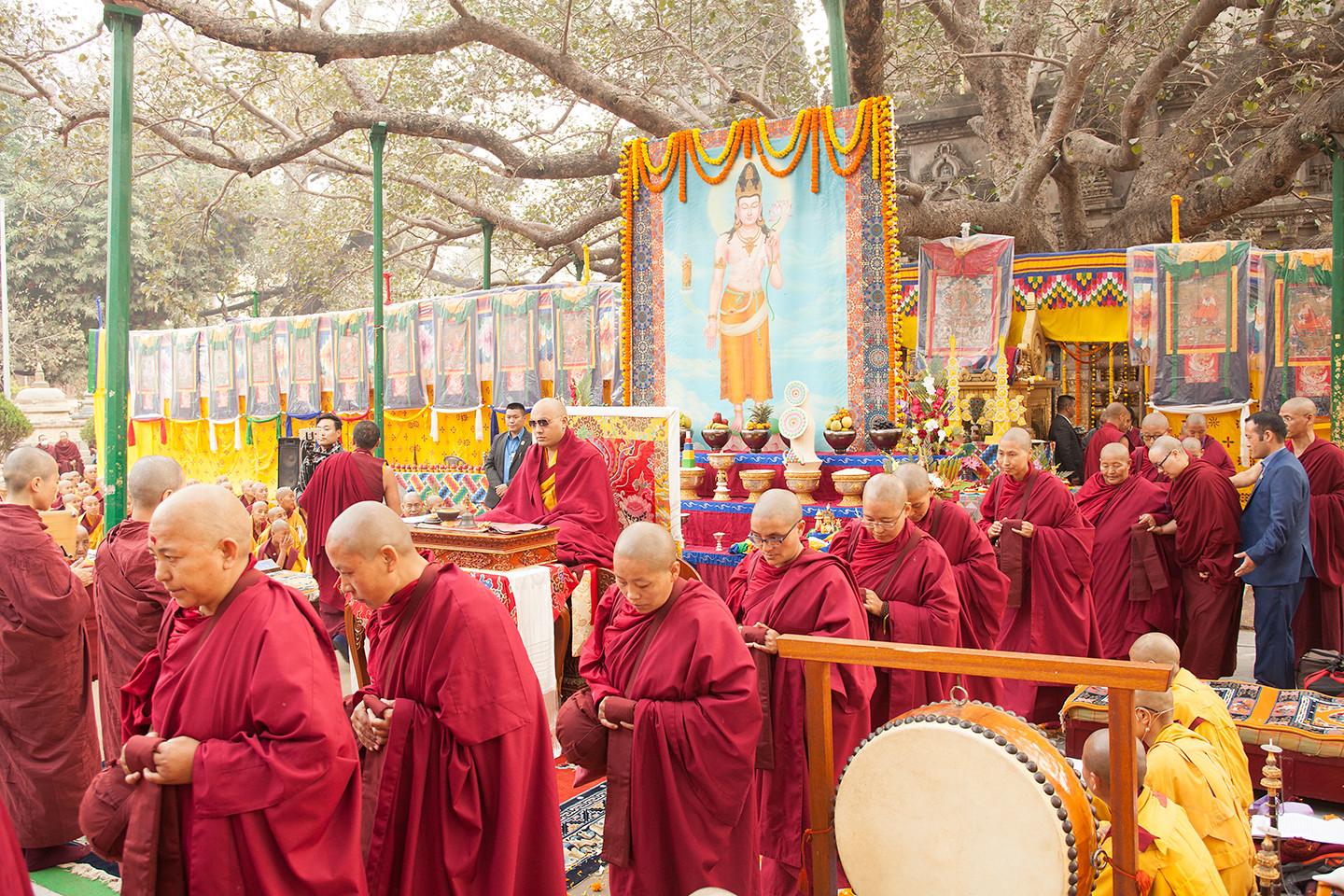 Ordained Nuns and Their History: The Karmapa Reports

In the second half of his teachings this morning, the Karmapa shared his research into the history of nuns and their status. He began by explaining the background of the name “Arya Kshema,” given to the Winter Dharma Gathering. He noted that among the disciples of Shakyamuni Buddha, there were his eight greatest male monastic disciples, known for their prajna (supreme wisdom) or miracles and so forth. Likewise, there were female master disciples who were greatest at miracles or known for their prajna and other outstanding qualities. Arya Kshema is one of these and she is described in the Sutra of the Wise and Foolish as the greatest in wisdom and confidence, so the Winter Dharma Gathering is named after her.

“In giving this name,” the Karmapa explained, “we are also following the saying, ‘Later disciples should practice the example of past masters.’ Previously, during the time of the Buddha Shakyamuni, there were woman arhats, bhikshunis, and woman with the eightfold purity. My thought was that we could look to them as examples, train properly in Buddhist teachings just as they did, and achieve the result of liberation. I thought they would provide inspiration and a role model.

“Actually, we had originally planned to have a conference during this nun’s Winter Dharma Gathering. The main topic was to be the lives of great individuals who achieved liberation in a female body, in particular those bhikshunis who were important disciples of the Buddha Shakyamuni. But we didn’t have enough time and it didn’t happen, so we will look into it again later.

“In any case, in Tibetan history—and this is something that historians have not paid much attention to—Karma Chakme wrote Mountain Dharma for Nuns. This is from the genre of texts called “mountain dharma” that compile the instructions necessary for meditating in mountain retreats, and this is a mountain dharma text that Karma Chakme compiled particularly for nuns. In it, he says that at that time (of the 10th Karmapa), there were more nunneries than monasteries in Central Tibet, and all the nuns in these nunneries had a good basis of discipline. He wrote that they kept their precepts extremely well. For this reason, historically the nuns’ teachings spread widely in Tibet.

“But those who wrote the histories did not pay much attention to this, and later only a very few took interest in how the nuns’ Dharma spread in Tibet or in the great beings who appeared in a female body. However, in history and in fact, there have been many individuals in Tibet who gained siddhis in a female body, and there must have been many female learned individuals as well. Nuns’ communities must have flourished greatly.

“Likewise, when the monastic community was first established in Tibet, which is said to be during the time of King Trisong Deutsen (742-800), there were the Seven Men for Testing. Some say “Seven Men” and some say “Six Men.” But whether it was six or seven, when they first established the monastic community, there were not only men who went forth, but women as well. Among the queens, those who had not given birth to children went forth. When they did so and were ordained, I don’t think that they were just called nuns and dressed in monastic robes. When we say the Seven Men for Testing went forth, we clearly understand that they received the entire ordination. Likewise when women went forth at that time, I do not think it means that they merely held the intermediate vows of going forth. So when Buddhism first spread to Tibet, it seems that a community of ordained women was established from that very time.

“Similarly, there are important Sakya histories called Documents of the Kings and the Sakya Familial Lineage. These say that many daughters born into the Sakya family line became bhikshunis and give many stories about them. Later there were people who say these are not true, but that is a little hard to accept. For one thing, Documents of the Kings and the Sakya Familial Lineage are considered reliable historical documents. Also, it is a bit difficult to say that only the stories of women going forth or becoming bhikshunis are false but everything else is true. Furthermore, among the scholars from Minyak, there was one named Kashiwa Rikpe. It states in his biography that there was a community of bhikshunis at Minyak Rapgang and that there were three to four hundred nunneries. Therefore, there was a time in Tibet when there were quite a few nuns’ communities.

“During the time of Lha Lama Yeshe Ö and his successor, there was a royal proclamation that stated no one was allowed to prevent women who wanted to go forth or become bhikshunis from doing so; one must let them go forth and become bhikshunis. So at that time there must have been female aspirants; otherwise, it would have been unnecessary to say that they should be allowed to go forth and become bhikshunis. Similarly, there are several biographies of Lotsawa Rinchen Sangpo that are of varying length. One of these tells how a younger sister of his was ordained as a bhikshuni. There are many such stories.

“We don’t know, however, what the situations or circumstances were that led the nunneries and nuns’ communities to decline later. This should be researched, as there must have been some conditions for it. Later, nunneries in Tibet were quite poor and badly off. Many of you probably don’t know this, but those of you who have stayed in nunneries in Tibet probably do. The living facilities are poor, and the opportunities for study are weak. This is very clear. We don’t know whether the reason for this situation is related to politics, the dominance of any dharma lineage, or something else. This needs to be examined.

“In any case, when we say nowadays that nuns should be educated, that they should develop their qualities, and that a community of bhikshunis should be established, this is not something that has only now become important. It is not saying that what was previously insignificant has become important. Instead, it was crucial in the past, and we need to explain how that was and also dispel any doubts or misconceptions about it.

“Before we received the text of the Great Exposition, Geshe Rinchen and I had discussed this point and thought it could be explained like that. Our understanding is exactly what we found in the text, so we gained some confidence. In any case, not knowing the entire situation, people have explained a few aspects and made a lot of noise while exaggerating things. This has led to many misapprehensions and misperceptions, which should be dispelled.

“We train in validity and say ‘It follows that…’ or ‘Because of x….’ We stomp our feet and clap our hands, and train in debate for many years primarily to dispel misapprehensions and misperceptions. We don’t do it only to become facile. The point of studying validity and logic is to dispel misapprehensions and misperceptions. If we say we study validity and follow logic but our misapprehensions and misperceptions increase, it is a sign we have not studied well. Since we study validity and use our logics, we must examine how they accord with facts. This is what we should consider most important. Being rigidly old-fashioned and holding to one’s own biases or views without proper reasons is not the way logicians should do things. I think that this is another reason why we need to consider this thoroughly.” With a look to the future and on-going research, the Karmapa drew this special morning talk to a close.