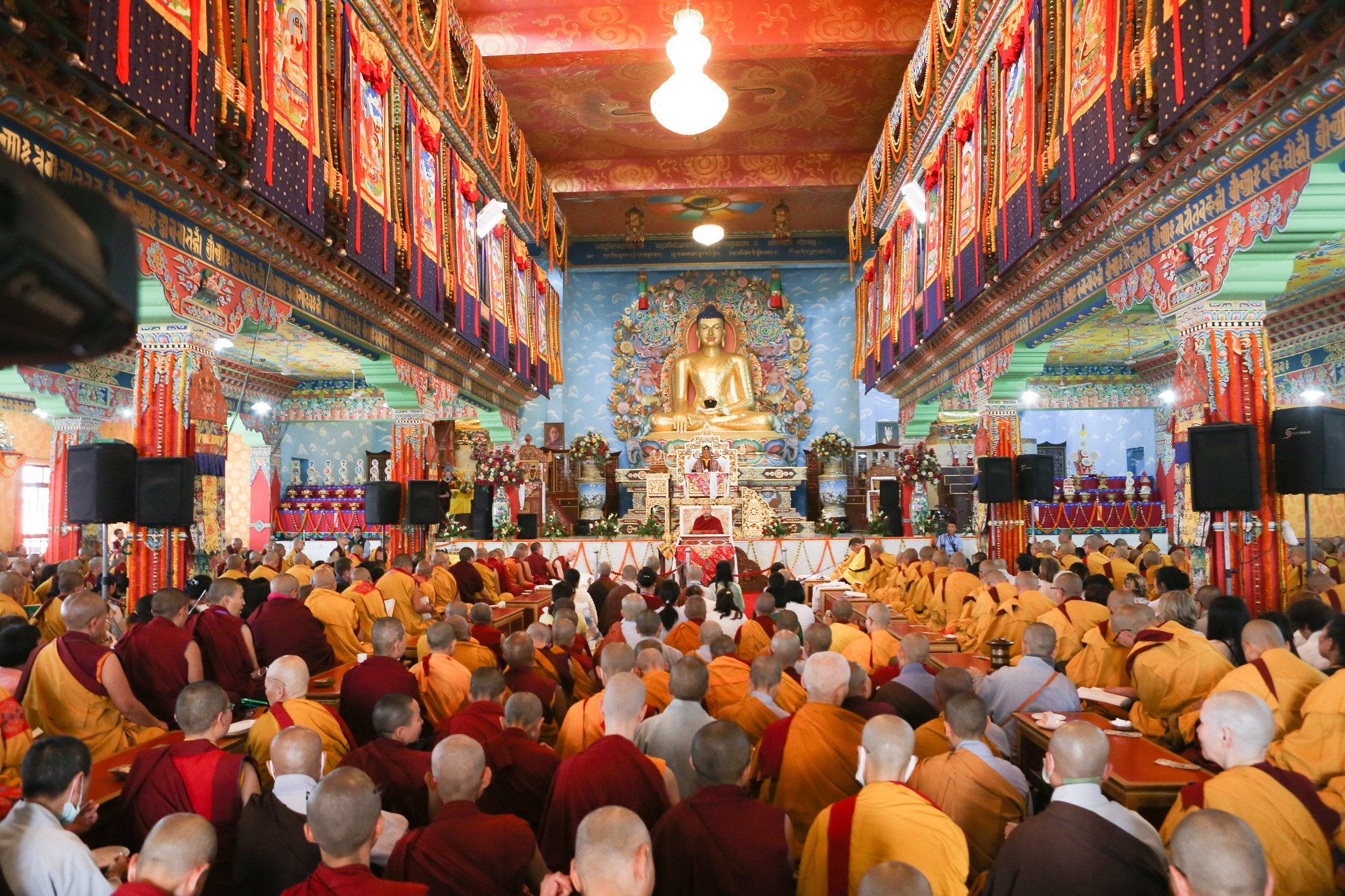 The Arya Kshema Winter Gathering for Nuns Begins in Bodhgaya

On this first day of the 4th Arya Kshema Winter Gathering, the Karmapa welcomed 560 nuns from nine different shedras (scholastic colleges) and their teachers, along with large groups of nuns from Taiwan, Korea, Vietnam, and China as well as a few from the West plus the community of laywomen. From March 6 to 18, the shedra nuns will be participating in the thirteen days of teachings, debate, and ritual ceremonies.

The Karmapa noted that there are two special aspects to this year’s event. First of all, the nuns from seven shedras will be competing for the first time. The judges will be three Geshemas, nuns who have recently passed all the exams after years of intense study of the major treatises and received the equivalent of the Geshe degree from His Holiness the Dalai Lama. The Karmapa remarked that having these brilliant nuns as judges indicates our respect for them and also inspires other nuns to attain the highest level of excellence.

Secondly, after years of research and discussion, the Karmapa related, we will start the historic path to full ordination for nuns in the Tibetan Buddhist tradition. This year Dharmagupta nuns from Nan Lin Nunnery in Lantou on the west coast of Taiwan will assist in giving the Getsulma (novice) vows which will be held for one year. Afterward the Gelopma (special vows), which are held for two winters or two summers, will be given, and finally the full ordination of the Gelongma vows. The Karmapa emphasized the importance of following a graduated path and going carefully step-by-step to build a strong foundation.

The Karmapa then returned to Gampopa’s Ornament of Precious Liberation picking up where he had stopped last year—the section on the ceremony for taking the bodhisattva’s vow from the ninth chapter on the “Proper Adoption of Bodhichitta.” He reminded his listeners that there are two lineages for taking the vows: one passes from Manjushri through Nagarjuna and the other from Maitreya through Asanga. The first one is usually associated with the Middle Way school and the second with the Mind Only school. The Karmapa stated, however, that this implies a hierarchy with the Middle Way being considered superior, so it is better to refer to the two as the lineage of the profound view and the lineage of vast conduct.

The ceremony for lineage of the profound view is further divided into two: a ceremony in the presence of a guru and not. When, as King Amba Manjushri was taking the vows, he did so in a ceremony without a guru. This is described here in the Ornament of Precious Liberation as it is in Atisha’s Lamp for the Path of Enlightenment. However, the scriptures on the bodhisattva vehicle state that it should not be too easy to take these vows. We should exert ourselves in searching for a guru, and if we are not successful, we can take the vows in a ceremony without one. Further, we may have found an authentic teacher, but in order to serve them, there may be a danger to one’s life or vows of chase conduct. Since this is the same as not finding a guru, in this situation we can also take the vows without a lama.

Referring again to King Amba, the Karmapa explained that the king had made offerings to the Buddha called Melody of Thunder for many years. When it came time to dedicate the merit, the king had wanted to do so for the sake of achieving the level of a sravaka or pratyekabuddha arhat. Then a voice from the sky encouraged him, “You must dedicate the merit to achieving buddhahood.” Following this advice, King Amba gave rise to genuine bodhichitta. The words he spoke, or the ceremony he performed, are found in the sutra called Establishing the Pure Realm of Manjushri, which is part of the Ratnakutra sutras. This is the ceremony we can do when not finding a guru.

Regardless of whether the ceremony is with or without a lama, we must first train our minds in aspirational bodhicitta so that it is not mere words, but comes from the depth of our heart. This is the actual basis for taking the vows. At a minimum, for one week beforehand, we should train our minds in bodhichitta through the pith instructions on cause and effect or in the practice of exchanging ourselves for others or the equality of self and other. Of course, it would be difficult to generate authentic bodhichitta in one week, but at least this training will create imprints in our mind. On the other hand, if we cannot say for sure what bodhichitta is, if it remains some intellectual fabrication and we merely repeat the words of the ceremony, it would be difficult to say that we have truly received the vow.

The Kadampa spiritual friend Potowa explained the stages of the practice. First we meditate to recognize that all living beings are our mothers and then feel gratitude to them for their kindness. This can bring about great love, and from this, comes great compassion. Then we can find the extraordinary intention that leads to the generation of bodhichitta.

The Kadampa master Netsulpa said the only way to bring perfect benefit to others and ourselves is to achieve buddhahood. As long as we remain in samsara, we cannot even accomplish our own aims to say nothing of benefitting others. Shravakas and pratyekabuddhas are able to partially accomplish their own aims, but they are unable to benefit others. Achieving full awakening, which comes about due to bodhichitta, is the only way that we can spontaneously benefit both self and others.

The causal chain leading to bodhichitta travels back through compassion to loving kindness, to gratitude for others’ kindness and to recognizing that they have been our mothers. This, in turn, depends on entering the view of the transitory collections, meaning that one has the view of a self (that longs to benefit others). This is said to be the tathagatas’ love. Geshe Sharwa’s explanation is basically the same as this sequence of causes, though he phrased it differently.

So rousing bodhichitta comes out of various causes and conditions, not just a single cause, and it is important to train our mind in these and develop bodhichitta in stages. Whether we are discussing Nagarjuna’s tradition of the profound view or Asanga’s tradition of vast conduct, the necessity of first training our mind remains the same.

The Karmapa then gave a reading transmission up to the third point, Taking the Special Form of Refuge. Afterward, he turned to speak about issues related directly to the nun’s gathering. It is said that our greatly compassionate teacher, Shakyamuni Buddha sacrificed one third of his lifespan so that the teachings would flourish and remain a long time. Some 2,600 years have gone by since he passed away, and until now, the teachings have remained continuous in the world, bringing great benefit and happiness to many beings. Included in the third of his lifespan that the Buddha sacrificed for the teachings are the teachings for the nuns, or those with a female body, so they could practice the three trainings or the three vows.

How we know this is based on the Dharma Blaze Aspiration, which is actually from a sutra taught by the Buddha called, the Sutra of the Essence of the Moon. This was not translated into Tibetan, but Atisha quoted from it in his Compendium of the Sutras and his citation included the Dharma Blaze Aspiration. At the end of this aspiration, there are two lines: “May my retinue flourish” and “May my retinue be respected.” The Tibetan, however, simply says, “My retinue,” and it is not clear what this means. Fortunately, the Sutra of the Essence of the Moon was fully translated into Chinese during the sixth century.

In this version, we find the Dharma Blaze Aspiration and also an explanation of “my retinue” as indicating the four types of retinue (bdag ‘khor rnam bzhi). The aspiration states, “May my retinue be respected through the power of bringing into the proper view those who had previously held the wrong views of the extremists.” Retinue here refers to the four types of retinue: the fully ordained monks and nuns as well as the laymen and laywomen. In brief, there are two groups of monastics and two groups of householders. The Buddha was making the aspiration that by the power of his declaring words of truth, may his four types of retinue flourish. This alone shows us clearly that the Buddha had the aspiration or hope that the community of fully ordained nuns would flourish.

It is sometimes said in Tibetan groups or in Buddhist centers that if women become nuns, it will harm the teachings. The same thing is also said about instituting the gelongma vows. However, if these steps would really harm the Dharma, the Buddha would not have wished for the nuns to flourish. If we think about these matters, we have to consider them in a spacious and broad-minded way.

The Karmapa closed out the morning with advice to the nuns on how to compete in debate without falling prey to worldly aversion and attachment. He suggested they remember that debate is for blending the Dharma with their mind. It is also good to relax a little bit to make their minds peaceful. The Karmapa offered his hopes and prayers that the Arya Kshema Winter Gathering would be virtuous in the beginning, the middle, and the end. The assembly then recited the Third Karmapa’s Aspiration of Mahamudra, a profound text on the nature of mind, which, in its focus on the ultimate nature, parallels the Heart Sutra chanted at the beginning of the teachings. Both texts describe and celebrate the perfection of wisdom embodied by women. 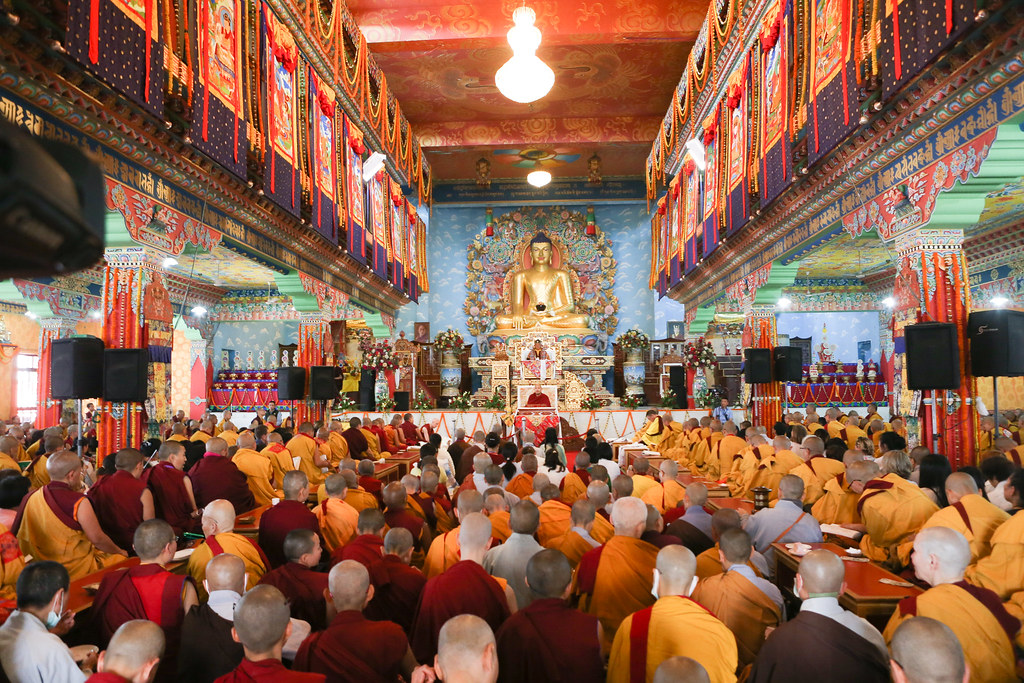