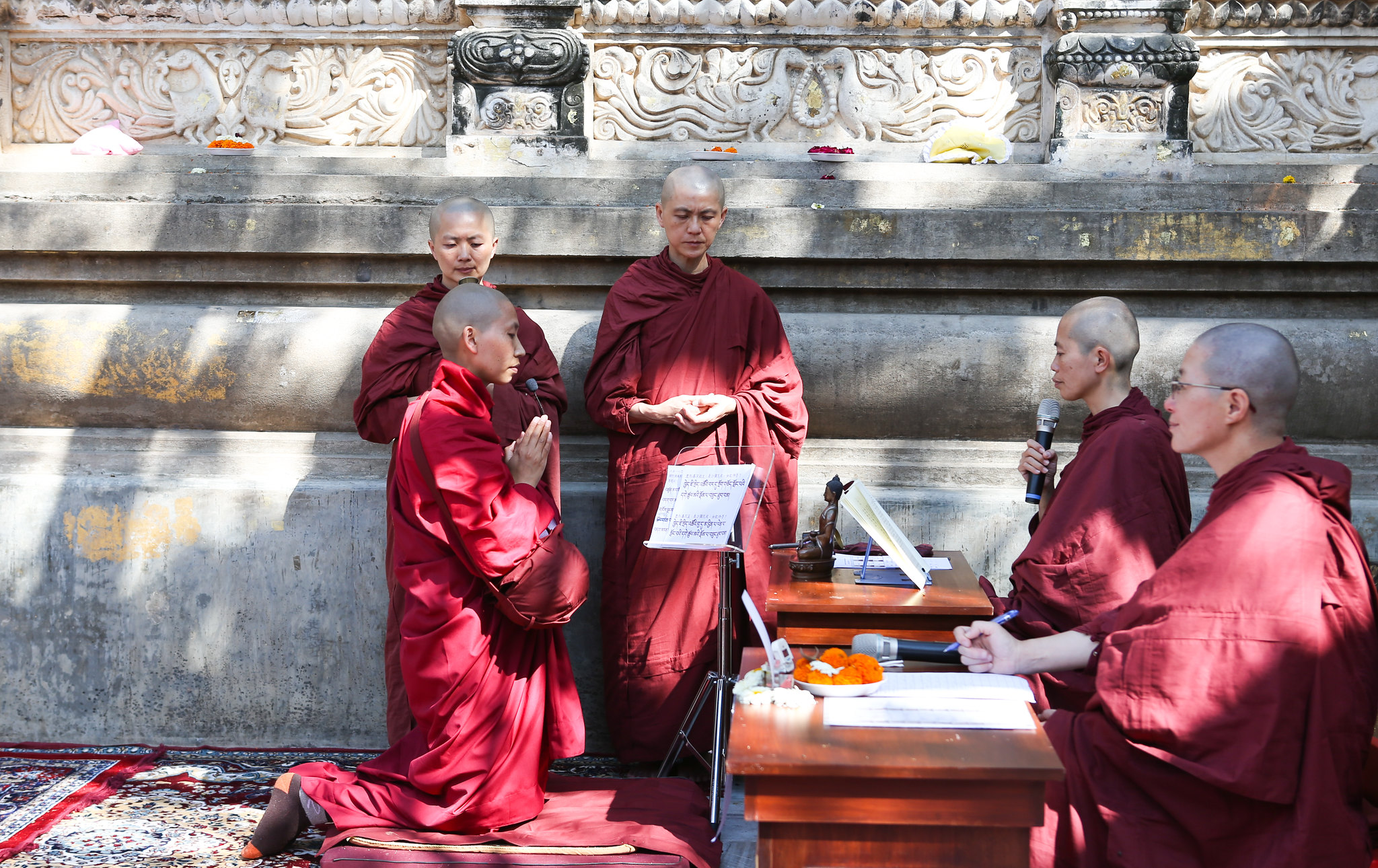 The Historic Revival of Full Ordination for Tibetan Buddhist Nuns

Tergar Monastery, Bodh Gaya, Bihar, India | Currently, many preparations are underway for the Getsulma (novice) ordination to be held during this 4th Arya Kshema Winter Dharma Gathering. The Karmapa plans to hold the ordination on the auspicious full moon day of Chötrul Duchen, the historic day that marks fifteen days after Losar and commemorates the time when the Buddha performed a different miracle each day to instill devotion. As the Karmapa mentioned during the first day of the Arya Kshema, this year initiates the historic path to the process of full ordination, which will occur in stages over several years. This is a well-thought process that grants nuns the opportunity to practice the authentic vinaya path. They will take the Getsulma vows in the tradition of a strictly observant tradition of Mahayana Vinaya nuns, thus garnering respect for their sangha and demonstrating their life-long commitment to their vows. Since there is no lineage for fully ordained nuns in the Tibetan tradition under the Mulasarvastivada vinaya, the Karmapa has collaborated with the nuns from Nan Ling nunnery in Taiwan who follow the Mahayana tradition under the Dharmagupta vinaya. These nuns practice the strictest form of the vinaya attending to vows such as not eating after noon and not traveling alone.

In preparation for the ordination, nuns from Nan Ling nunnery including the Khenmo, who gives the vinaya, and the Lopon, who teaches the vinaya, have been teaching nineteen Tibetan nuns from six different nunneries the vinaya and the proper rituals for the ceremony. The day prior to the ordination ceremony, the nuns will participate in a confession ceremony, repenting to remove any obstacles in the path. Both this process of purification and the ritual ceremony itself are crucial aspects of generating the Getstulma vow. As described by one of the nuns, since these vows are part of the form skandha, the nuns who take these vows are like vessel, and there is a form that comes into this vessel the moment the nun receives the ordination. Due to this, there is significant effort and considerable planning and preparation to ensure that the nuns receive the vow exactly.

Many of the nuns taking these vows have been practicing nuns for thirty years or more, but when they take this vow, the are committing to studying from the beginning as if they are nuns from day one. This means they are learning everything from how to bow and how to walk. The Karmapa has confidence in the abilities of the nuns and he knows that they are capable of committing to practicing the strictest form of the vinaya. By doing this, the nuns will generate respect for the sangha. It also demonstrates both the sanctity of the vow and commitment of these nuns for benefitting future generations of nuns. After holding these Getsulma vows for more than one year, they will take the Gelopma vows. Following the time period of two winters or two summers, the nuns who are requesting, taking, and observing these Getsulma vows will be able to take the full Gelongma vows in three or so years with the requisite ten Mulasarvastivada monks and the ten Dharmagupta nuns.

These nineteen nuns’ efforts and commitments to their vow are vital for continuing the transmission of this lineage within the Tibetan tradition. The care exerted in the preparation and ceremony, and the years of in-depth research into the history of ordination for nuns, both inside and outside Tibet, reflect the Karmapa’s courageous commitment to gather support and respect for the nuns and create the conditions for reinstating full ordination within the Tibetan tradition.