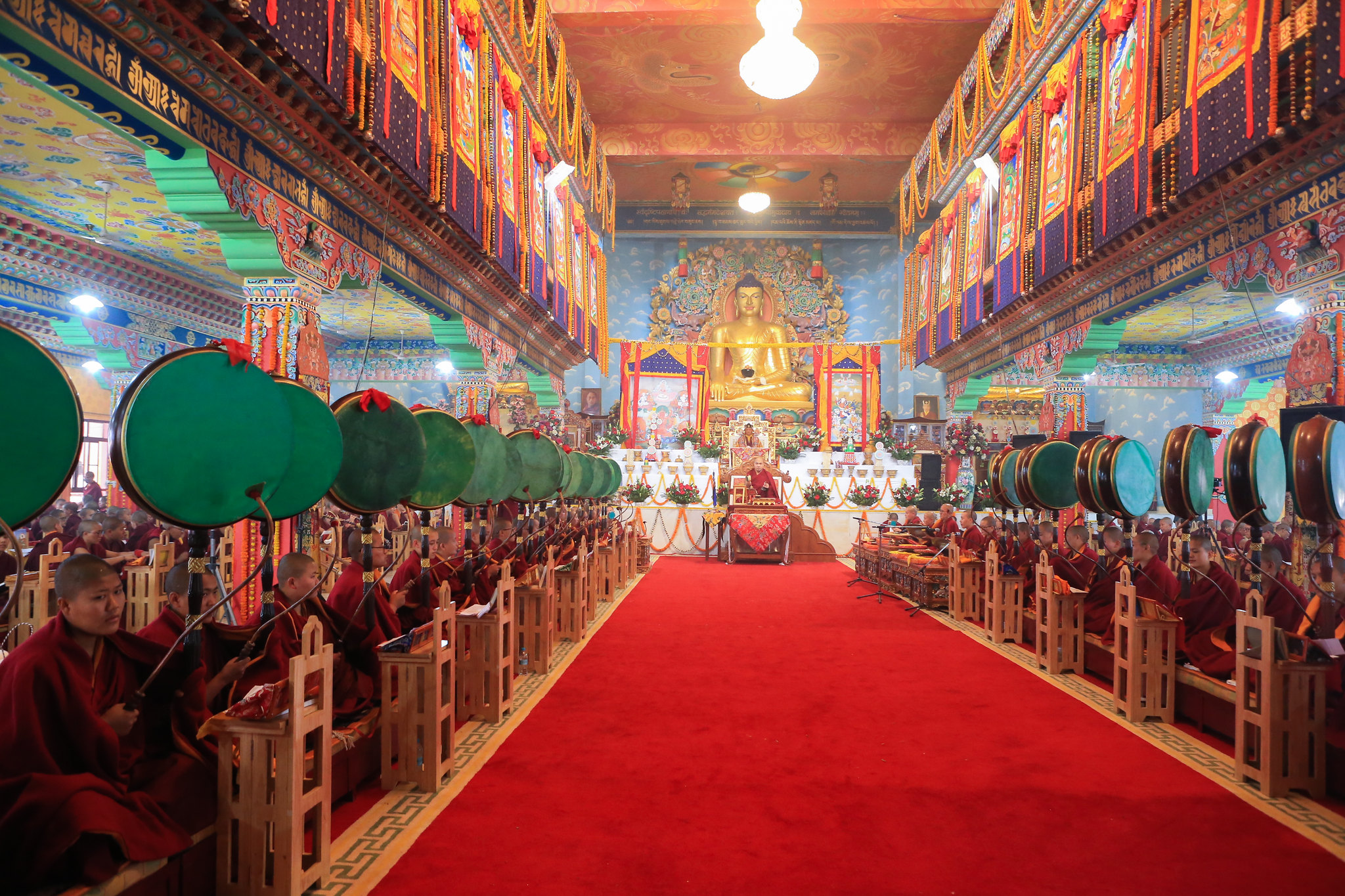 Tergar Monastery, Bodh Gaya, Bihar, India • March 9 to March 11, 2017 | After three days of talks on Gampopa in the morning and then debate for the rest of the day from March 6 to 8, the nuns engaged in three days of practice in the main shrine hall of Tergar Monastery. Beside the Karmapa’s throne were two stunning paintings: the one on his right depicting the mandala of Gyalwa Gyatso (Red Avalokiteshvara), and to his left was a lively, swirling presentation of the Five Tseringma (long life) goddesses, making it seem that they had just appeared out of the high mountain winds. Between the two, was the more simple, carved wooden throne where the Karmapa sat as a powerful presence for the three days.

The first practice in the morning was the Karma Pakshi Sadhana and Feast Offering, composed from a pure vision that came to a previous incarnation of Mingyur Rinpoche, the founder of this Tergar Monastery. The practice relates to the thangka (scroll painting) of Gyalwa Gyatso that hangs next to the Karmapa, since the five deities of this mandala are also found in the sadhana of Karma Pakshi. The text of the Karma Pakshi practice begins with beautiful teachings on the nature of the mind, such as:

If you remain without clinging to anything that appears, whatever arises is liberated of itself.
Not wandering from this, seeing nakedly with mindfulness and awareness—that is the path.

As if demonstrating this, during the morning break, the Karmapa came down from his throne and walked around the shrine hall, talking to the nuns, especially the chant leader, and making adjustments in how things were set up. After playfully engaging with the hard-working staff, he returned to his throne to finish the practice.

Earlier, the Karmapa had explained that there is a custom of combining the practice of Karma Pakshi with that of Tseringma, which is the practice for the afternoons. At 1:30, the Karmapa came back to the shrine hall to preside over this practice of Tseringma, which this year involves torma offerings and a practice of repairing and fulfilling, often performed for the purpose of extending the lama’s life. The previous day, the Karmapa had explained that Tseringma practice is continuing from last year (when this version was first published by his Altruism Publications), so that the community of nuns would flourish and be free of any obstacles to their study and practice.

The Karmapa also explained that Tseringma is the principal one of the twelve goddesses or spirits who protect Tibet. And she is not merely a goddess, but an extraordinary being as Milarepa chose her to be the holder of his teachings in the non-human world. Milarepa stated, “My teachings will be held among humans by the Teacher from U (Gampopa, who was from central Tibet) and Tseringma will hold them in the non-human realm.”

This dual holding of the teachings harks back to the Buddha and his decision to have two types of beings hold his teachings. He considered entrusting them just to humans, but they have a short life so the teaching would not last long. If he gave them to the gods, however, they are continually distracted by sensual pleasures and, therefore, careless. So the Buddha decided to install Mahakshayapa as his regent in the human realm, and appointed the Kings of the Four Directions as the holders of his teachings in the non-human realm. Milarepa was following, therefore, a custom dating back to the time of the Buddha.

The Karmapa also mentioned that last year, this Tseringma practice was also performed so that the reincarnation of Tenga Rinpoche would come quickly, and this again year it will be recited so that he may be swiftly found.

During the long hours of the puja, the Karmapa sat on the throne as straight as the long-life, beribboned arrow that rose from the table next to him. 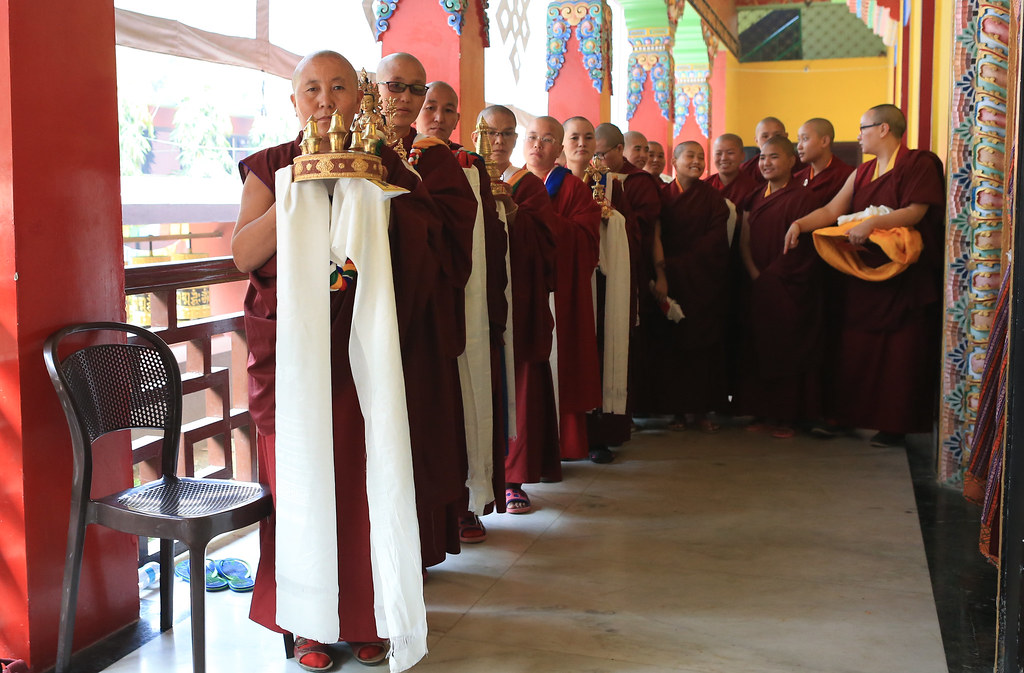