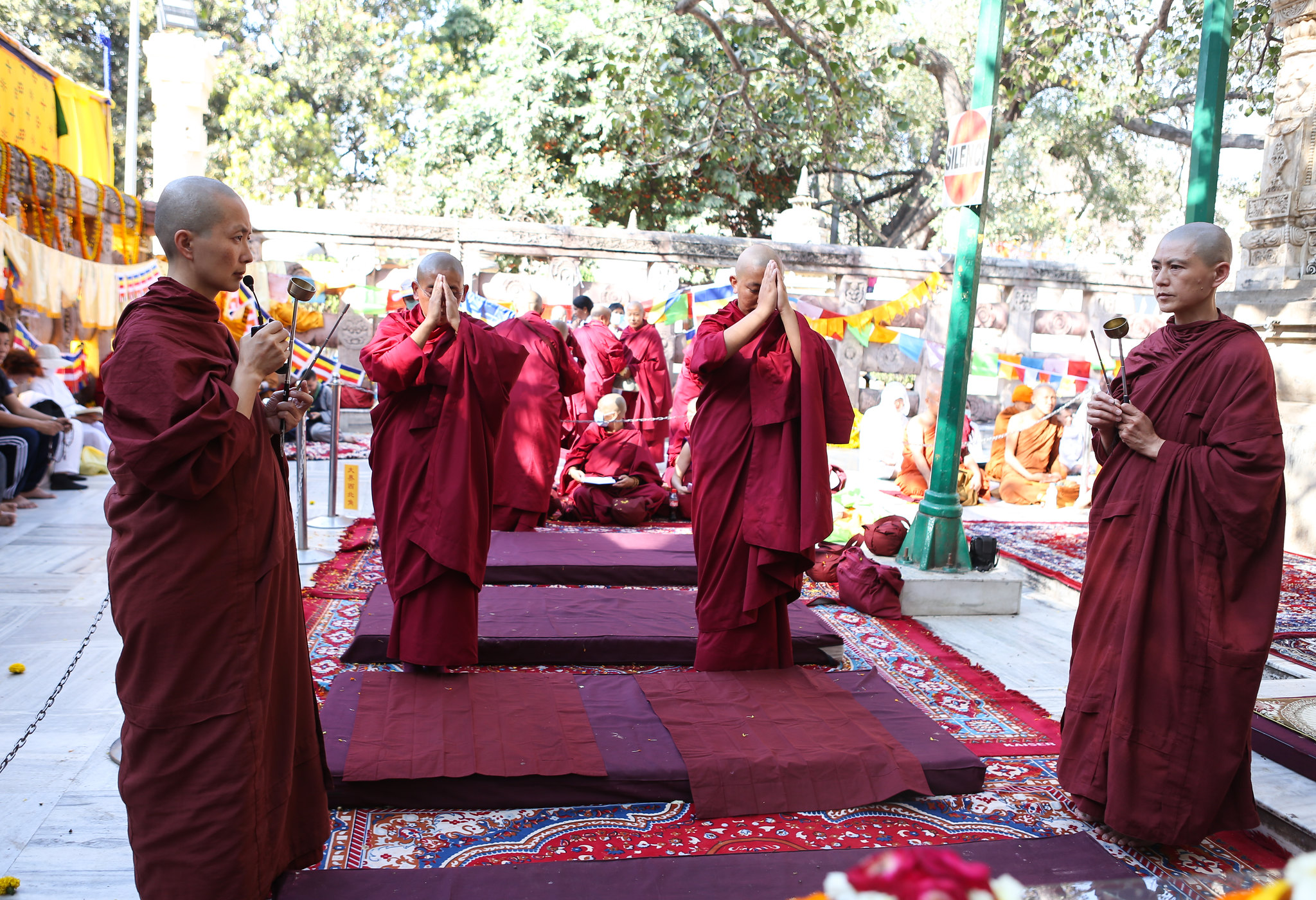 History in the Making: The First Step Toward Full Ordination for Tibetan Buddhist Nuns

Bodh Gaya, Bihar, India • March 11, 2017 | On December 28, 2016, in a historic letter sent to his Kagyu nunneries in India, Nepal, and Bhutan, the Karmapa officially announced that the actual process of establishing full ordination for nuns in the Karma Kamtsang tradition would begin. He stated that at the site of the Buddha’s enlightenment in Bodh Gaya, on the auspicious day of the full moon in the Month of Miracles, (the first month in the Tibetan calendar, falling on March 12, 2107), the shramaneri (getsulma) vows would be conferred on those nuns wishing to take full ordination.

Following much deliberation, a path to full ordination was established. It was decided that the nuns would hold these shramaneri vows for a year, after which they will take the shikshamana (gelopma or training) vows from Dharmaguptaka nuns and keep them for two winters or two summers. Finally, they will receive the bhikshuni (gelongma or full ordination) vows with the participation of nuns from the Dharmaguptaka tradition and Tibetan monks from the Mulasarvastivadin tradition. This gradual path follows the Karmapa’s reasoning that in establishing full ordination for women, it is crucial to move step by step, laying a solid foundation and building upon it. An important part of this three-stage process is that the vows are transmitted along a female lineage at each level, so the Dharmaguptaka nuns play a critical role here.

This year’s ceremony, therefore, is the culmination of years of extensive research and careful consideration of the many complex aspects of the process. Fundamentally, the Karmapa’s willingness to open this opportunity for full ordination reflects his modern and deep understanding of the gender issues in Buddhism and his whole-hearted support for women in Buddhism and nuns. In his book, the Heart Is Noble, the Karmapa stated:

The categories of masculine and feminine are often treated as if they were eternal truths. But they are not. They have no objective reality. Because gender is a concept, it is a product of our mind and has no absolute existence that is separate from the mind that conceives of it. Gender categories are not inherently real in and of themselves.

Relating this to the actual situation, the Karmapa has said during the Arya Kshema gathering:

Both the Karmapa and HH the Dalai Lama have often emphasized the importance of the four pillars of the Sangha—male and female fully ordained nuns and female and male lay practitioners. Scriptures state that for a land to be considered a noble one, all four of these must be present.

Citing precedent within his own lineage as well as the necessity of bringing Buddhism into the 21st century (his life’s mission), the Karmapa has committed himself to supporting the nuns for his entire life:

I think it’s important for me to do everything I can in order to support nuns’ teachings and practice, and to increase their listening, contemplation, and meditation. So I want to put as much effort into this as I can, from the bottom of my heart. I think this is something that’s appropriate for me to do from now until the end of this lifetime. I think it fits well with the activities of the previous Karmapas, and it’s also something that is definitely necessary within our contemporary society.

To give the first, shramaneri vows, the Karmapa invited nuns from Nan Ling Nunnery (also known as Daksinawana Bhiksuni Sangha Ashram) situated in an isolated area of western Taiwan. It was founded in 1981 and their sixty nuns observe an old tradition of the Dharmaguptaka vinaya (monastic discipline) while also following the mahayana with a focus on the practice of Amitabha. According to their vinaya, abbess (khenmo) bestowing the vow must request permission from her sangha to bestow the vows, and since this was given, the abbess was able to come to Bodh Gaya for the historic event.

This year, though the minimum number of nuns needed to confer the shramaneri vows is two, nine nuns from Nan Lin Nunnery came to help with the ceremony. Among them were the two main teachers, who must be present: the abbess Shih Jian Sheng, who gave the vows and the scholar (lopon) Shih Jian Ru, who taught the vinaya. The other nuns came to assist in the intensive daily teaching from March 3 to 11. During these very full days, the nineteen nuns from the Himalayan region, who were taking the vows from these Dharmaguptaka nuns, studied the vinaya in the morning and the procedures of the ceremony in the afternoon. Two nuns, one Tibetan fluent in Chinese and one Chinese fluent in Tibetan, helped to translate the ceremonies so that the nuns knew what they were saying and what they had to do.

Reflecting the great importance of taking these vows, before the ceremony, the nuns spent hours in a ritual of repentance and purification, examining their minds to eliminate obstacles. This process is part of ensuring that all the conditions are right for taking the vows and that the nuns have become a proper vessel for them. Then during the ceremony itself, something is present as the vow in a subtle form that comes into this vessel and at that moment the nun receives the ordination.

Before this happens, during the ceremony itself, the nuns are questioned extensively to see if they are, indeed, suitable vessels for the vows. They are asked questions about the thirteen major obstacles that would prevent them from ever taking the vows, the sixteen that must be cleared before they can, and so forth. Since this questioning takes considerable time, it was decided that some of the nuns would start taking the vows a day earlier and the entire process would be completed on the full moon day.

On March 11, under the great spreading limbs of the Bodhi Tree, next to the main stupa and the Vajra Seat where the Buddha attained full awakening, a special area was cordoned off for the ceremony and covered in red floral rugs. On the nuns left rose the gray stone wall of the Mahabodhi Stupa, where four niches held images of the Buddha, decorated in fresh garlands of yellow and orange marigolds. Wearing Chinese style nuns’ robes, stitched in burgundy cloth for the occasion, the nuns sat in rows facing the abbess and scholar. The two Dharmaguptaka nuns sat behind desks with images of the Buddha, and on the ground in front of them was a special cushion covered in a brocade mandala.

From 7am onward, the nuns came up one by one to bow and kneel here as they answered the extensive questions about obstacles, which were posed by abbess Shih Jian Sheng. She also asked each nun if she could hold and maintain each of her requisite ten vows, to which each participant replied, “Yes, I can.” After responding to the khenmo, the nun stood and bowed before the scholar Shih Jian Ru, who pronounced the name of the new getsulma and the exact date and time of the vow conferral, which she recorded.

The ceremony finished in the late afternoon, and it turned out that the nuns had been very well prepared so the ceremony went very smoothly and quickly, and all but one nun could receive the vows. This final nun would take them the next day during the celebratory ritual when the Karmapa would be present. Today’s landmark occasion ended with showering the nineteen nuns in red, pink, and yellow flowers. These still adorned them as they stood to bow once again to the abbess and scholar, acknowledging their key role in opening the doors to this special world of practice for nuns. 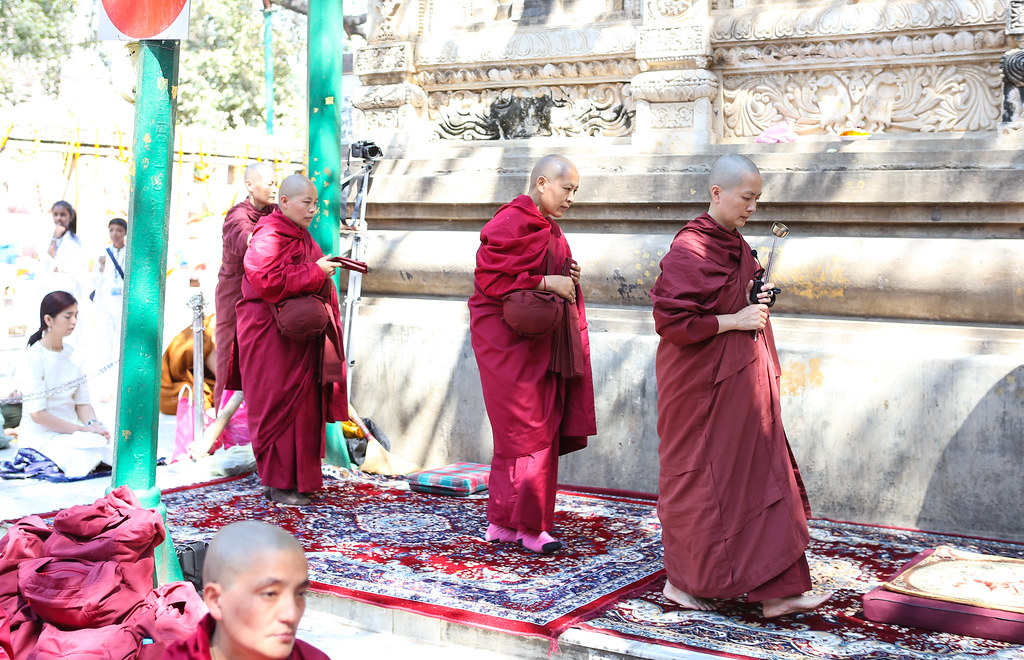