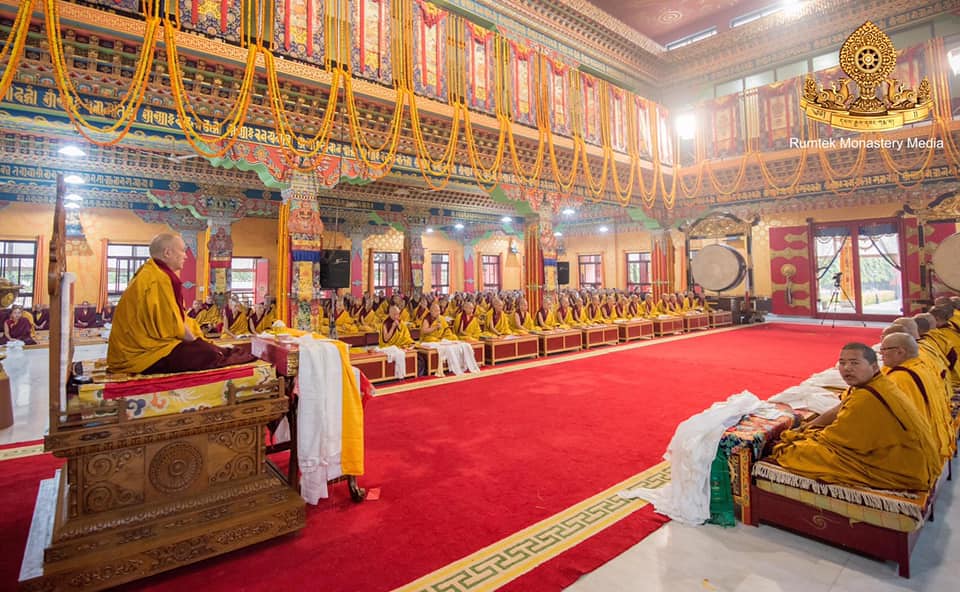 Tergar Monastery, Bodh Gaya • 24 January 2019 | To the sounds of gyalin played by nun musicians, His Eminence Goshir Gyaltsab Rinpoche entered the Tergar shrine room in procession, escorting a portrait of His Holiness the 17th Karmapa, Ogyen Trinley Dorje. The photograph was placed carefully on the throne, where it will remain to symbolise the presence of the Karmapa, who had wanted to attend but was unable to because of circumstances beyond his control.

350 nuns have gathered from 6 nunneries to take part in this year’s Nuns’ Winter Dharma Gathering. They come from Tilokpur and Palpung Yeshe Rabgyeling in India, Ralang in Sikkim, and Karma Samtenling, Thrangu Tara Abbey and Karma Thekchen Leksheling in Nepal. The nunneries take it in turns to organise the event and the 5th Arya Kshema has been organised by Tilokpur Nunnery, the oldest Kagyu nunnery outside of Tibet. It was founded in 1966 by a disciple of HH the 16th Karmapa, Freda Bedi otherwise known as Sister Palmo.

When His Holiness inaugurated this winter debate session for nuns in January 2014, he specifically chose to call it the Arya Kshema after the foremost of the Buddha’s female disciples as a cause for the nuns to become better educated and more confident. As such it has become an important part of the academic year, giving the nuns opportunity to memorise and debate from textbooks specially prepared by His Holiness the Karmapa .In this, the nuns are following the same curriculum as shedra monks.

After opening prayers, nun representatives from the six nunneries offered a ku-sung-thug [body, speech and mind] mandala to Gyaltsab Rinpoche, and celebratory sweet rice was distributed.

In his short address, Gyaltsab Rinpoche stated that the 5th Arya Kshema was being held according to the wishes of His Holiness the Karmapa. He described how the tradition of learning within the Kagyu tradition had been revived, beginning at Rumtek Monastery in Sikkim, under the guidance of the 16th Karmapa, Rangjung Rigpe Dorje, and then during the time of the 17th Karmapa, Ogyen Trinley Dorje. Learning and study have now become widespread across Kagyu institutions both outside and within Tibet, so that these days there are many scholars and khenpos.

However, he continued, scholarship and study must go hand-in-hand with practice. He recommended that the nuns emphasised learning when they were young, but as they got older, they should also practise. Obviously, an individual’s ability for learning and practice would depend on such things as karma and propensities. Some might choose to focus on practice: though they might not become so learned in terms of knowledge, they would become good practitioners. Others might focus on learning and become very learned to the point that they are able to write commentaries and scholarly works of their own.

Rinpoche emphasised the importance of studying the Dharma. To be able to teach even one word of the Dharma can be a source of benefit to another person, and could be the cause of great benefit to a multitude of beings in the future. Consequently, it was important for both the monks and the nuns to concentrate on learning, as this could be the cause for tremendous benefit and a great contribution to the flourishing of the Dharma in the future. He reminded everyone of the prediction made by Terchen Chogyur Lingpa who had a vision of the 18th, 19th and 20th Gyalwang Karmapas surrounded by and in debate with learned members of the sangha.

His Holiness the 17th Karmapa would be watching, and would be very pleased to see everyone focus on their studies. It would be a cause for his swift return to India. In addition, studying together and debating [as they would be doing over the next two weeks], Rinpoche pointed out, was a far more effective and fruitful way to study than studying privately in one’s room.

With those words of encouragement, the 5th Arya Kshema began.

The programme for the days ahead will be as follows: 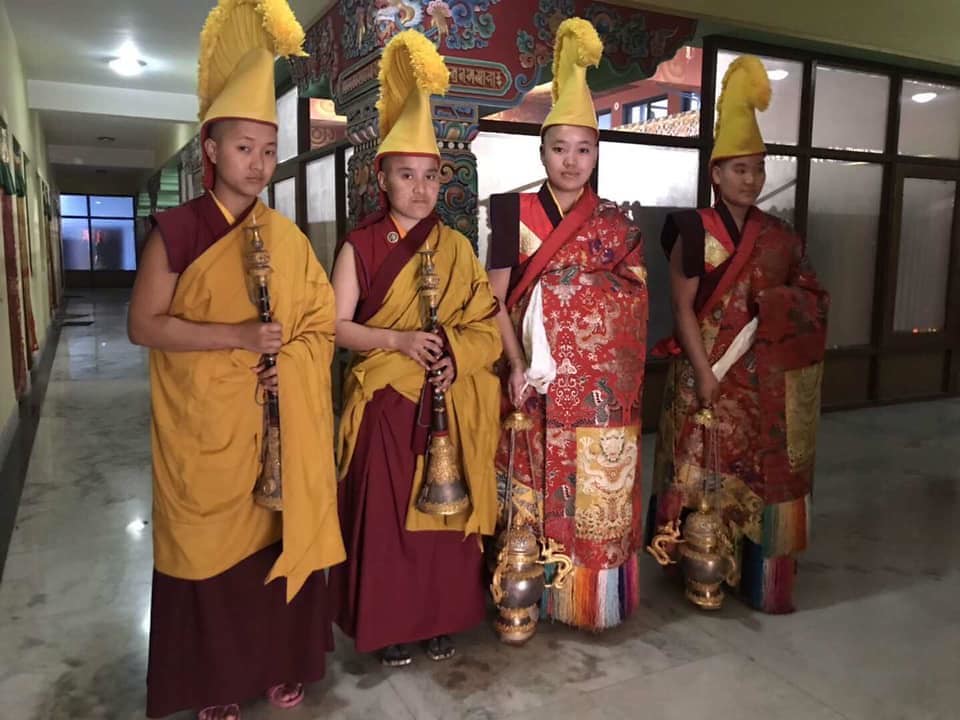