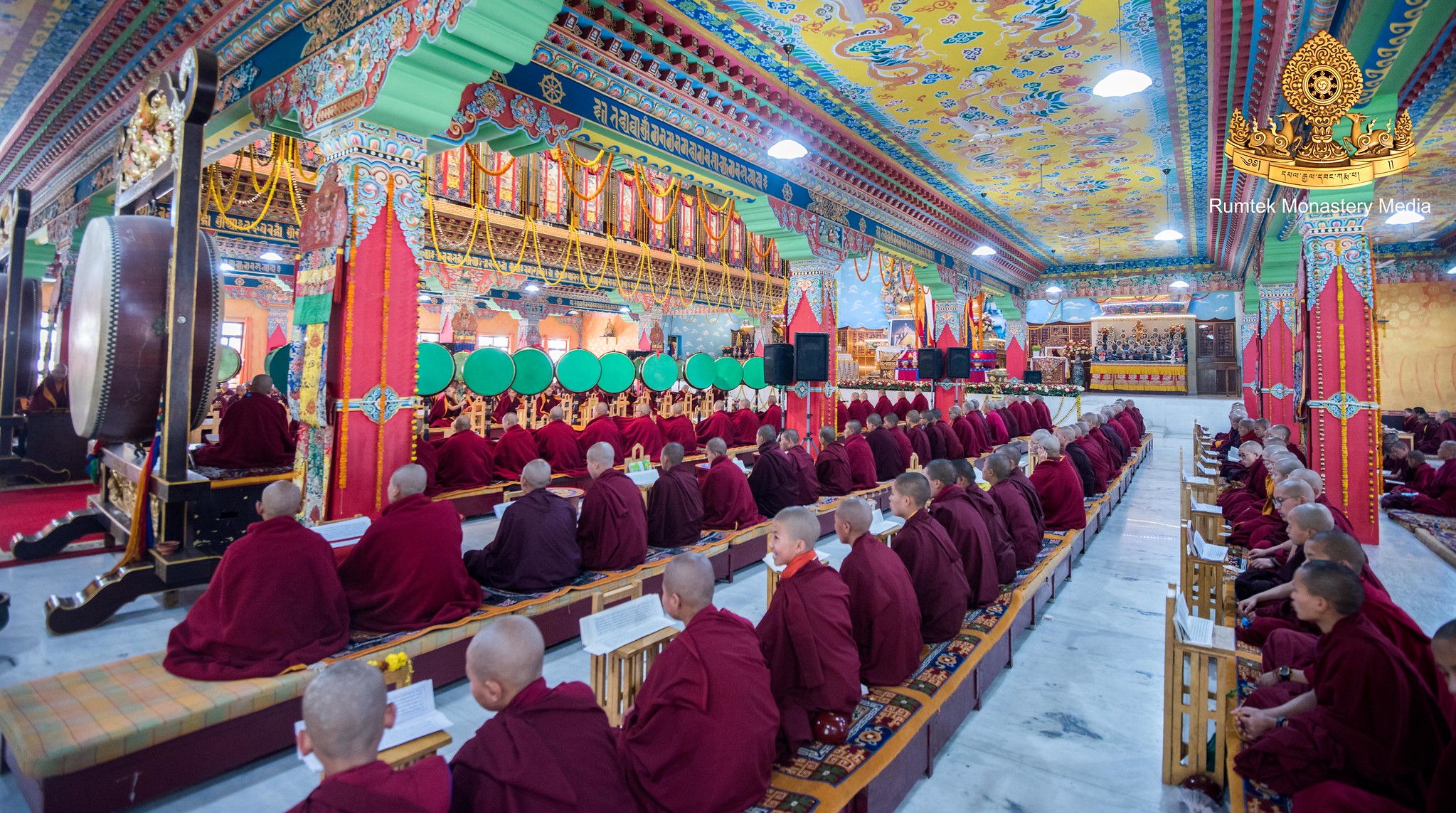 The Nuns Offer Two Rituals: Dolkar and the Five Tseringma

As part of the annual schedule, in the final days of the gathering, the Arya Kshema nuns offer the rituals of White Tara (Dolkar) and the Five Tseringma. Both of these are long-life rituals.

The main shrine room at Tergar had been prepared specially for both rituals. Great loops of fresh marigold garlands hung from the balconies below the thangkas of the Kagyu forefathers and Karmapa lineage. On the left of the stage stood an altar with a statue of White Tara beneath a parasol. Covered in pure white cloth also hung with fresh marigolds, the altar displayed offerings and a large white torma. Each morning, the nuns recited the Dolkar sadhana twice. The Dolkar ritual was dedicated for the well-being and long life of His Holiness the 14th Dalai Lama and His Holiness the 17th Gyalwang Karmapa.

To the right of the stage, a second altar had been prepared, covered in a dark red cloth, edged in blue ribbon. On the top tier, sat an image of Jetsun Milarepa, the other tiers held tormas and offering bowls for the Five Long-Life Sisters, protectors of the Kagyu teachings.

According to the hagiography, these five were initially healing spirits, living in the mountains on the Nepal-Tibet border, until subjugated by Guru Padmasambhava and commanded to protect the Buddhist teachings. They became protectors especially of all the Kagyu through their relationship with Jetsun Milarepa. First, they tested Milarepa by trying to distract him from meditation, but he resisted them, and, having recognised that he was a true yogi Dharma practitioner, they received teachings from him, thus forging their link as protectors of the Kagyu teachings.

During the 3rd Arya Kshema, the Karmapa elaborated on the origins of the special relationship between the Kagyu lineage and the Five Tseringma and the reason that Tseringma was appointed.

When Shakyamuni Buddha was near the end of his life, there was a dilemma over the best way to preserve his teachings. To entrust them solely to humans was problematic because humans are short-lived and the teachings needed to endure for a long time. Conversely, to entrust the gods with the teachings might also be unsatisfactory. Though the gods were long-lived, they might be unable to uphold the teachings because of their distraction by sense pleasures. As a compromise, Shakyamuni Buddha entrusted the teachings to a human, the great regent Kashyapa, and to the Four Great Kings of the higher realms. The Karmapa explained that Milarepa was following this precedent when he appointed the human Gampopa and the goddess Tseringma to uphold his teachings. “In the human realm, my teachings are held by the Teacher from Central Tibet (Gampopa). In the non-human realm, they are held by Tseringma,” declared Milarepa.

During the 3rd Arya Kshema, the Karmapa expressed the hope that in the future when the teachings spread, there would be great female beings who would look after the teachings.

“My hope, my aspiration,” he said, “is that each of the five Tseringma sisters will send an emanation as a nun to support the teachings. Maybe I'm being too bold, but it might just be possible.”

At previous winter gatherings, the Karmapa has emphasised the importance of this practice, and so this year, led by Drupon Dechen Rinpoche, the nuns recited the Tseringma sadhana twice on each afternoon, fulfilling this commitment. 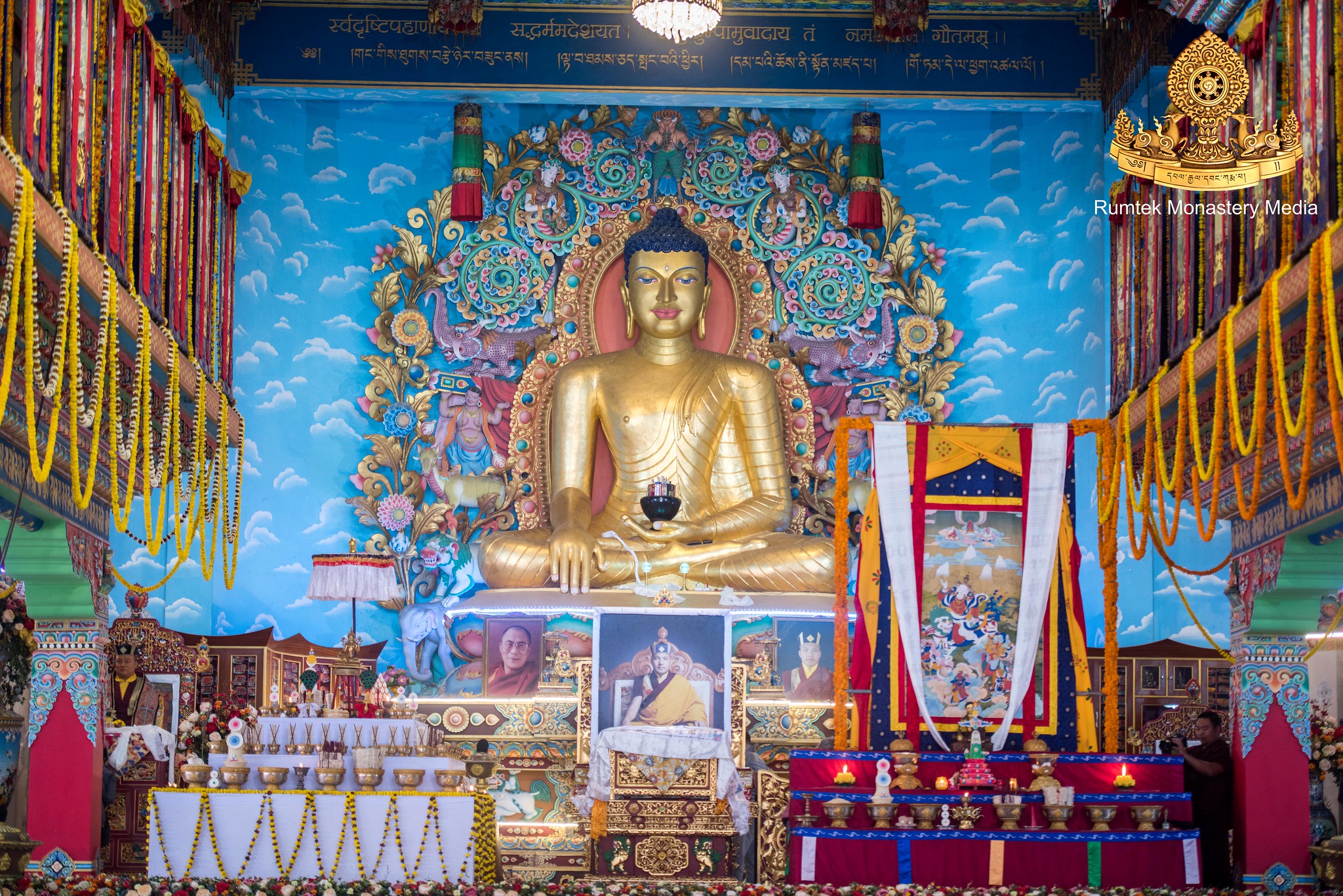