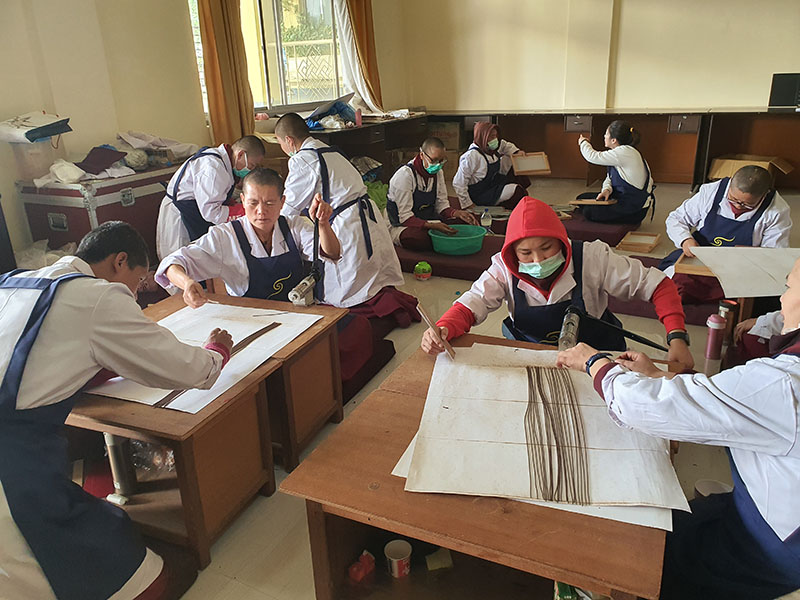 The Incense-Making Project for Nuns Resumes for a Third Year

17 nuns from different Kagyu nunneries attended this third training course in Tibetan incense making, organised and sponsored by Tsurphu Labrang, the office of administration of His Holiness the 17th Gyalwang Karmapa, and the Kagyupa International Monlam Trust. The project was initiated by His Holiness the Gyalwang Karmapa and is now under the direction of Drupon Dechen Rinpoche. The course was run by Dr Dawa, assisted by Chiu Ju Yueh, a professional Chinese incense maker from Taiwan, and Chomo Jangchub Drolma, who acted as translator, as well as lead incense-maker. It covered all aspects of incense making and mainly focused on using traditional methods when possible.

This year, as previously, two qualities of incense were produced, based on ancient formulas provided by His Holiness the Gyalwang Karmapa. The less expensive one was made from just two ingredients: cedar and white Himalayan rhododendron. The more expensive one— from a recipe recorded in the Sorig Patra by Deumar Geshe Tenzin Phuntsok, a highly-respected physician in 18th century Tibet —contains thirteen medicinal herbs and substances including nagi, cloves, cardamom, Kashmiri saffron, white sala and bdellium. Both incenses were made using the highest quality, pure ingredients gathered from the Himalayan regions of India, Nepal, Bhutan and Tibet. The nuns also produced a high-quality chilli powder made from Manang chillies.

Wearing overalls, facemasks and gloves, the nuns’ first task was to grind all the ingredients. Three methods were used depending on the nature of the substance. Minerals and hard substances were ground using a round stone rolled on a stone block, herbs, leaves, spices, and chillies were ground in an electric grinder, and the ground chillies were pounded into a fine powder using a pestle and mortar. Once the different ingredients had been sifted, they were combined proportionately, according to the formulas, and liquid was added to make a mixture which could be piped through a machine to form long strings of incense. These were cut to size and layered in wooden boxes to be placed to dry on the roof of the Monlam Pavillion.

On January 8th, the Ven. Khenchen Lodoe Donyo Rinpoche, who had been presiding over the 22nd Kagyu Gunchoe, visited the project and enthusiastically joined in, using the stone base and round stone to grind the minerals.

Once dried, the incense will be repacked into presentation boxes to be sold during the 37th Kagyu Monlam Chenmo, and all proceeds from the sale will go towards education for the Karma Kagyu nuns, and especially for supporting the Arya Kshema Winter Dharma Gathering.