The Multiple Ways of Benefitting Beings

The Multiple Ways of Benefitting Beings,
His Holiness the 17th Karmapa’s Teachings on Gampopa’s Ornament of Precious Liberation
Day Four

The chanting of the Heart Sutra followed by the Dorje Chang Thungma filled Tergar shrine room as the nuns of the Dharma Winter Gathering met once more to receive teachings from HH the 17th Karmapa on Lord Gampopa’s   Ornament of Precious Liberation. The session began at 9.30am, but the nuns’ day had begun at 5.30am. They had already been studying for three hours, memorising the debate texts and practising their debate skills over at the Monlam Pavillion.

Over preceding days, His Holiness had covered the first two trainings in discipline of the bodhisattva: the disciplines of refraining from harmful actions and accumulating virtuous qualities. He resumed his teaching of the third training in discipline, that of benefitting beings, at the seventh of eleven points: benefitting those who wish to settle somewhere.

In his introductory remarks, the Karmapa explained that the eleven activities for benefitting beings listed by Asanga in his Bodhisattva Levels had been compiled from different Mahayana sutras, and were in the affirmative. Chandragomin’s list in Twenty Verses on the Bodhisattva Vow was basically the same but written from the negative perspective of infractions of the Bodhisattva Vows. Hence Asanga’s ‘benefitting those who wish to settle somewhere’ is parallel to Chandragomin’s ‘not benefitting your disciples’.  In Tibet this had meant caring for a community and gathering monks together, as mentioned in the life stories of many great Tibetan masters. There are two different ways to understand ‘settling somewhere’, His Holiness commented.  One is in the context of providing material resources, such as beds or a place to stay, the other is found in the Vinaya which talks about the local guru who gives direction in the Dharma and takes responsibility for people as their lama. Hence, the seventh action of benefitting others implies both benefitting people materially and also in the dharma.

Not everyone is interested in achieving liberation, so the skillful lama has to gather people together according to their needs, inclinations, and capacities. This may well be initially on a material basis, providing food and shelter. When resources are limited, practising generosity remains important. Even when a monk subsists on alms, he should not use everything for himself, but share things in common. Having gathered students together, the lama now has the responsibility to guide them in the dharma as much as possible, according to their predispositions, dominant afflictions, faculties, and so forth. This is where clairvoyance helps. Examples, at the time of the Buddha, would be Nanda, whose primary affliction was desire, or Angulimala whose affliction was hatred. They had to be given the dharma and guided on the path with ways appropriate to them. Sometimes the lama has to recognise that their teachings are not appropriate for a student: Rongton Lhaga acknowledged that he could not help Milarepa and directed him to study with Marpa, a teacher who could tame his mind.

The last two refer to self-deluded pride and unless we abandon pride there is no space for the qualities to develop, His Holiness observed.

Moving on to the eighth action, this is benefitting those who wish to come into harmony. The infraction found in Chandragomin reads ‘not engaging in a way that accords with others minds’. The important thing, His Holiness commented, is to be able to accommodate other people, and be in harmony with them, in both mind and conduct. This demands a degree of empathy and understanding.  As an example of accommodating in conduct, he cited ways of dealing with badly-behaved school students by examining the causes of their misbehaviour and working with them in different ways in order to help them moderate their conduct. Sometimes we have to accommodate someone in terms of thinking. The example His Holiness gave was when an open-hearted, compassionate lama is slighted or criticised. It has no effect on him, but it might provoke anger amongst his students and lead to them taking action. His students need to bring their thinking in line with their lama’s view, and be one mind with the lama’s mind. In summary, it is extremely important that we are able to get on harmoniously with everyone.

After the tea-break, the Karmapa discussed the last three of the eleven actions for benefitting sentient beings.

The ninth point, ‘benefitting those who wish to act properly’, corresponds to the fault of ‘not speaking in praise of qualities’ in Chandragomin’s verses.  It focuses on the importance of taking delight in and celebrating the qualities that other people have, and publicising them. The internet age, His Holiness warned, has created new dangers from instant comment, unconsidered praise or criticism, and the use of pseudonyms to protect anonymity. We often don’t take time to think things through properly before we post them, and they quickly spread widely.

Excessive praise is as bad as false criticism. Claiming qualities for a lama who does not possess those qualities can be counter-productive. The Karmapa gave, as an example, an observation by Karmapa Mikyö Dorje, that there were many stories about his youth, written by older lamas, which were taken from the lives of previous Karmapas and did not reflect his real life story.  Also, at that time, there had been a dispute over the identity of the true incarnation, so in order to determine this, a test was conducted with ritual articles and letters used by the 7th Karmapa.  Mikyö Dorje admitted that he could only identify some of these and not all, yet he was credited with identifying all of them. Though such life stories are meant to inspire people, they could have the opposite effect if they went too far, His Holiness commented. It is important to know when to praise and when to criticise, and not to be two-faced about it: praising the lama to their face and criticising them or stirring up conflict behind their back. If you have faith in and love for the lama, you should praise them in private. As The Way of the Bodhisattva says: Speak of good qualities discreetly, repeat them when they are spoken of.

“Our mouths make most of the problems in our lives,” His Holiness wryly commented, deflecting the discussion to the COVID 19 epidemic, which is thought to have originated from the consumption of meat from wild animals.

The tenth action is ‘benefitting those who are misguided in their behaviour’, which is paralleled by ‘not stopping wrong appropriately’ in Chandragomin. Bodhibhadra’s commentary speaks of not stopping wrong or faults in an appropriate way. Whether you use a gentle or a harsh method, you should point out faults in order to help people.  You need to assess the extent of their fault and assess the best method to help them.

The final action in Asanga’s list is ‘benefitting those who can be tamed by miracles’. Although the text here uses the word ‘digpa’ [sdigpa:Tibetan for misdeed], the meaning is actually to threaten or instil fear. It means using miraculous powers to make people afraid to commit misdeeds, for example showing them the hell realms. There are stories of lamas in Tibet who were able to do such things but we do not have miraculous powers.  The Lamp for the Path to Enlightenment says:

Just as a bird whose wings aren’t fledged cannot fly in the sky, without the powers of clairvoyance, one cannot benefit beings. The merits that those with clairvoyance attain in one day and night aren’t gained in even a hundred lives by those who do not have it.

In order to benefit sentient beings, it is important to develop clairvoyance. But this is difficult to achieve without the practice of the dhyanas, though some people exist who falsely boast of it. Pretending you have clairvoyance or miraculous powers when you don’t will only bring you difficulties. How then, the Karmapa asked, can we practise this eleventh action?

There’s a Tibetan saying: Failing once teaches you more than being taught a hundred times.

Too much advice and too much teaching can be a fault, His Holiness suggested, and related the story of Naropa and Tilopa. Tilopa was just a fisherman, but Naropa followed him. Daily he would go and prostrate to Tilopa but Tilopa didn’t teach him any dharma. Then one day, Tilopa took him to the roof of a building and told him to jump. Naropa jumped and hurt himself badly. “How are you feeling now?”  asked Tilopa. Fortunately for Naropa, Tilopa was able to heal him miraculously.

The most evocative namthar, however, is that of Milarepa. Marpa sent him to live in a remote place with wild animals, but this was not because of Marpa’s lack of compassion. As it says in the Songs of Milarepa:  In caves and unpopulated lands, it’s never time, and discouragement is dispelled.  Because of such difficulties, Milarepa was able to become the great yogi of Tibet. It was not that Marpa lacked compassion but that he had too much compassion, as evidenced by the times when he would cry over Milarepa.

Thus, making a student undergo hardship with an altruistic intention can be a way of benefitting them, His Holiness explained.

The teaching concluded at this point.

Although he could not be physically present, the Karmapa assured the nuns that he was watching the Winter Dharma Gathering over the internet, and encouraged them to engage enthusiastically in the debates and pujas from the beginning to the end of the programme. 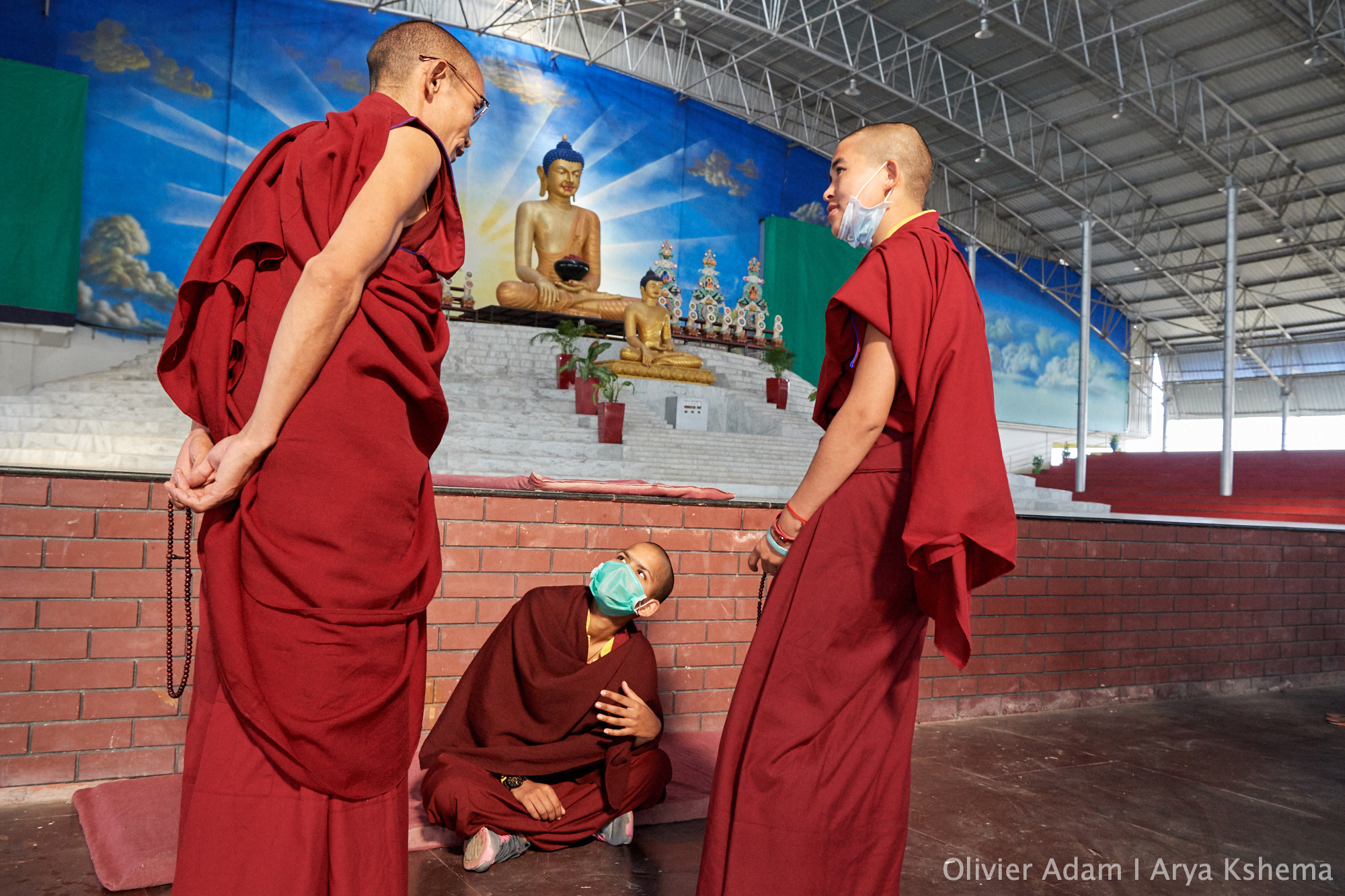