In December 2020, the Winter teaching on The Four Dharmas of Gampopa was the focus for the Kagyu Winter Dharma Debate, held annually for the monks’ shedras. This teaching is the Arya Kshema Spring Dharma Gathering directed at the nuns’ shedras, though monks’ shedras, dharma centres and a worldwide audience of laypeople are also watching.

Seven nunnery shedras are participating: Tilokpur and Palpung Yeshe Rabgyeling in India, Ralang Kyegue Dhagmo Chosling in Sikkim, Karma Samten Ling, Thrangu Tara Abbey and Karma Thekchen Leksheling in Nepal, and Karma Drubdey Palmo Choskyi Dingkhang in Bhutan. Before the webcast commenced, the nunneries made mandala offerings to the 17th Karmapa.  Nuns from Karma Drubdey nunnery provided the backing as His Holiness sang The Praise “He searched thoroughly”  and recited the opening prayers.

Introducing the topic for the month’s teaching, the Gyalwang Karmapa commented on how many scholars within the Kagyu tradition felt a particular affinity for Karmapa Mikyö Dorje:

It is not just that he wrote commentaries on the Middle Way, Prajnaparamita, Vinaya, and Abhidharma. It is also because he used the power of his own diligence at learning and the power of his intelligence to write many complete and unerring explanations of the intent of the sutras and tantras; the assertions of the great texts; the view, meditation and conduct of the Kagyu masters of the past, and so forth.

At one point during the teaching, His Holiness quipped, ‘Today I’m just telling stories all day long!” But, as he had explained earlier, this teaching was not intended to be a history lesson. The Gyalwang Karmapa’s aim was twofold. His first intention was to help us understand the origins of the lineage and appreciate its greatness:

If we think we should uphold, preserve, and spread well the teachings of the Practice Lineage, we need to know what its origins are, how the forefathers initially established the teachings, how later masters upheld them, and in the end, how much hardship and effort they went through in order to spread them… The more we research and study this, the more we can understand what the majesty, the essence, and the true value of this lineage are.

Secondly, we are dharma practitioners and any study needs to be internalised. The real instructions of the great masters of the past were not written down but are evident in the way they lived their lives, their thoughts and activities; the test of authenticity is whether the guru’s thoughts and activities accord with the dharma. These two autobiographies demonstrate how “an ordinary person, an ordinary monk worked hard to make his life be in harmony with the dharma…they are direct instructions from his experience during his lifetime.. profound instructions on real practice”.

The Karmapas have become known as the Black Hat Lamas. The Karmapa asserted that the Black Crown tradition definitely originated with Dusum Khyenpa and the first black crown was either made by him or by others under his direction. It was not offered to him by a king, high lama or any other person. Dusum Khyenpa was the first to wear the Black Crown, and his students visualised him wearing a black crown. Karma Pakshi supports this:

Because he [Dusum Khyenpa] was the same in essence as Saraha, as a symbol of the unchanging dharma nature, he wore a crown of black silk with a gold blaze such as had never appeared anywhere before on earth, representing the unrepresentable through co-emergent wisdom mahamudra and through various symbols…

These early crowns were unelaborate and stitched from ordinary material. An example still exists— Karma Pakshi’s crown at Karma Gön.  Further, His Holiness pointed out that the Karmapa’s crown is not black but a very dark blue. There are several explanations for this, one being a connection with Buddha Akshobhya in the Vajra Buddha family in tantric practice. His Holiness quoted another explanation of its symbolism as described by Rangjung Dorje:

Namo guru! I prostrate to the lord gurus.
Dakinis, grant your blessings.
I shall explain in part the qualities
Of this black crown with garuda wings and gold blaze.

Having two garuda wings
Is a symbol of the inseparability of means and prajna.
Having three points is a symbol
Of the three kayas being complete in him.

Having four colours is a symbol
Of accomplishing the four activities.
Being adorned with five silks
Is a symbol of the five families dwelling above the head.

Having the parasol, sun, and moon
Is a sign that the guru is a wish-fulfilling jewel
And always accompanies, never apart.
Having a blaze on the forehead
Is a symbol of knowing the one dharma that liberates all
And understanding everything known to be one.

This crown that has these symbols
Is the rainbow of the great Brahmin.
It was bestowed by the dakinis.
It is the crown of Dusum Khyenpa.
May those with faith and devotion for this crown
Meet glorious Dusum Khyenpa.

The Black Crown itself has changed many times during its history. In the Chinese court, hats indicated status, and the histories and biographies clearly state that the Mongol and Chinese emperors gave crowns to the Karmapas. Karma Thinley mentions two such crowns in the Great Encampment: “one made of Mongolian fabric that the Mongol emperor Timur Khan offered to Rolpay Dorje [Fourth Karmapa], and one called Dzamling Yeshak studded by many jewels given by the Chinese emperor Qing Ha to Lord Tongwa Donden [Sixth Karmapa]”.

Indeed, the Karmapas accumulated a great treasury of gifts and offerings they had received, but many of these treasures were lost at the time of the Tenth Karmapa, Wangchuk Dorje, during the war with Gushri Khan. Even more were lost during the cultural revolution. All that remains is locked away in the treasury at Rumtek Monastery.

In addition to wearing the Black Crown, the Karmapas also perform the Black Crown ceremony, but, as His Holiness acknowledged, its origins are less clear. The histories suggest that it began during the time of the Seventh and Eighth Karmapas, but it is possible that it began earlier. In his biography of Sonam Gyatso [Third Dalai Lama (1543 CE – 1588 CE)], the Great Fifth Dalai Lama recounts how the Karmapa performed a Black Crown ceremony specially for Sonam Gyatso, which had a great effect on the latter.

The format of the ceremony has changed several times. Even during the lifetime of the Sixteenth Karmapa, many small changes were introduced. The main point, however, is that the ceremony was a thongdrol or “liberation on seeing” and its aim was to encourage virtue. Participants were urged to recite ten million mani mantras, to perform life releases, and to keep pure conduct.

Another tradition associated with the Black Crown ceremony, and widespread across Tibetan culture, is reciting the six-syllable mantra [OM MANI PADME HUM], singing it to a melody, and carrying a mani prayer wheel. This tradition of mani recitation originated with Karma Pakshi, whose main yidam deity was Red Chenrezig, Gyalwa Gyatso. Karma Pakshi spread the practice across Tibet.

There seem to have been two different crowns used in the Black Crown ceremonies which can be identified— Meaningful to See and Dzamling Yeshak. These appear to have been more elaborate and jewelled than earlier crowns, but the basic features remained the same. No one is sure which of these the 16th Karmapa wore.

The mani mantra was used by the Karmapas from the time of Karma Pakshi until at least the time of the Fifth Karmapa, Deshin Shekpa, and then it was replaced gradually by “Karmapa Khyenno” meaning “Karmapa! Please watch over me. Please protect me.” However, as His Holiness reminded everyone, the name “Karmapa” means "the one who accomplishes the Buddha's activities” and as such applies to any authentic guru. Whenever we recite “Karmapa Khyenno” we should visualise that we are supplicating all the lineage gurus and spiritual friends not just those in the Karmapa lineage. 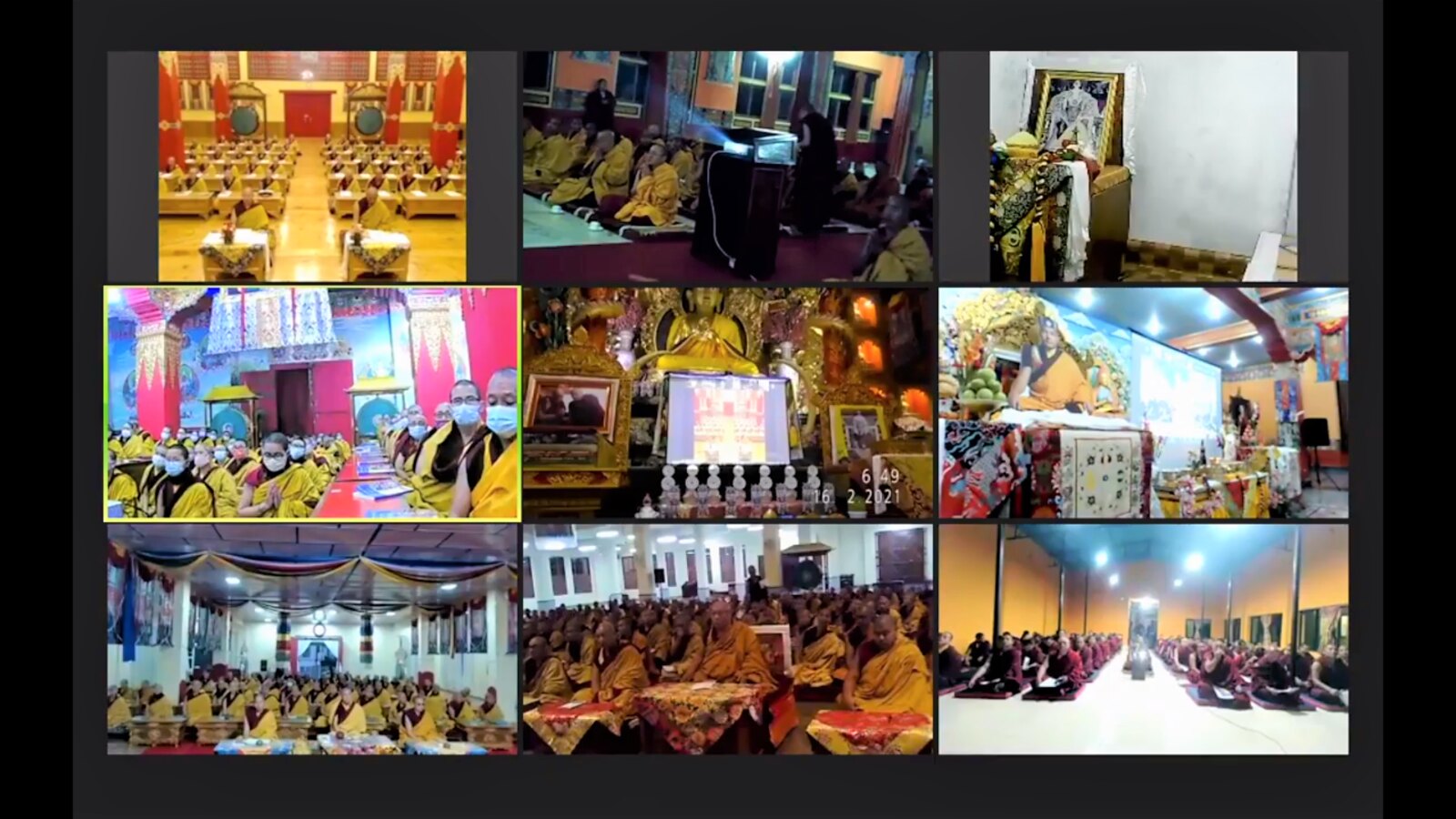