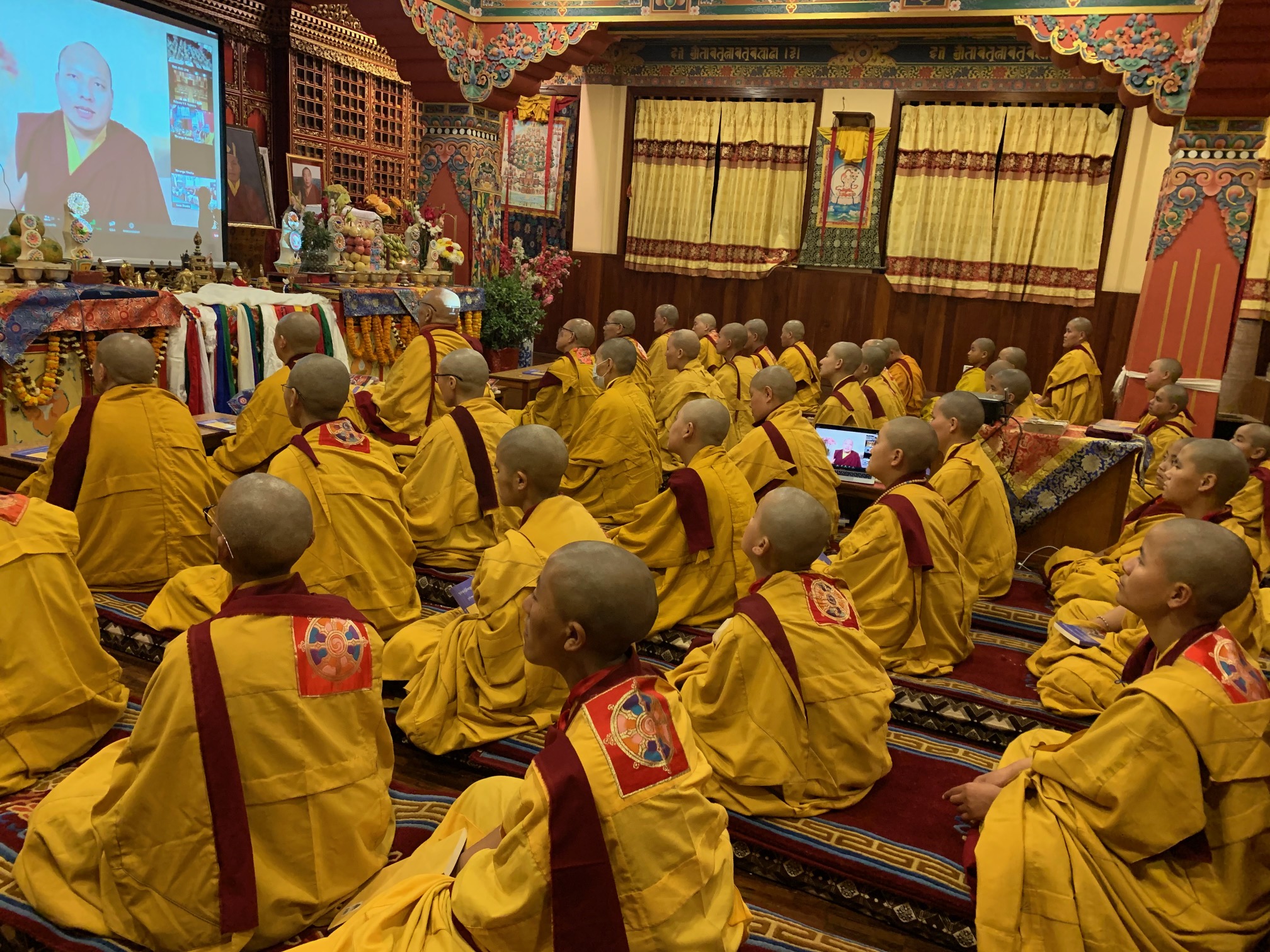 Part 1 – Listening to Liberation Stories and the Importance of Faith

Following the recitation of the opening prayers, on the second day, His Holiness emphasized two important but interrelated topics – how liberation stories reveal the path to practitioners and the crucial necessity of faith.

For instance, Sangye Paldrup’s commentary on the Good Deeds says:

Sangye Paldrup mentions several different stories of Mikyö Dorje’s liberation. Other than the one prepared by Akhu Atra, the other two liberation stories are not found in the collected works.

His Holiness explained the texts to be discussed in this teaching are: The Life of Karmapa Mikyö Dorje Called “Good Deeds” Written by Himself and the Praise “He Searched Thoroughly…”. The Good Deeds is the longest and most complete autobiography of Mikyö Dorje. The edition of the Good Deeds that he is using comes from the first volume of the Collected Works of Mikyö Dorje that has been preserved in the Drepung Nechu Lhakhang library.

His Holiness shared a story about his delight in first encountering the Collected Works of Mikyö Dorje. When he was in Tibet, there were more than one-hundred old Kagyu manuscripts and  texts in the libraries of the Potala, Norbulingka, and Drepung Nechu Lhakhang.The old texts were from the Tse Lhagang Monastery in Kongpo in the same location as the treasury of the Karmapas. According to the Great Fifth Dalai Lama’s autobiography, the texts were brought to Ü when this monastery was destroyed.

Many of these cloth-wrapped texts were still sealed with red stamps and had not been opened and read in 300 years, but Tsurphu Khenpo Loyak carried all these old manuscripts back to Tsurphu Monastery. His Holiness shared his fond memory of the experience,

“I still remember that day very well. I brought a stick of incense down to welcome the texts. It was the first time in my life that I was an incense bearer. We arranged silks on top of a table and placed the books there. At that time, I was next to Lagen Drupnam and he opened up a volume of Mikyö Dorje’s collected works. Mikyö Dorje’s collected works were held together with wooden boards and leather straps. When the leather straps were undone, they fell apart into many pieces because they were so old. When we touched the cloth covering the text, dust clouds billowed up. Looking at it from the outside, you would have thought the text inside had decomposed. Instead, the pages shone. Most of the text was handwritten and we were so delighted to see it; we all gasped ‘Ah!”

His Holiness animatedly expressed his pure joy when he encountered the collected works of Mikyö Dorje or any of the Karmapas. While at Tsurphu his quarters were right across from the library, so he would always get texts and read them including the collected works of the Thirteenth Karmapa and Fifteenth Karmapa. One story he particularly enjoyed was in the Thirteenth Karmapa’s collected works. In the story called “Dharma Taught to the Little Mouse Drupgyu Tenzin,” a mouse teaches meditation to a vole. The vole was unable to sit cross-legged so they made a meditation belt out of grass so that he could.

Gyalwang Karmapa went on to explain the meaning of the title “Karmapa”, the one who performs activities. He commented that in the word “Karmapa”, karma is from Sanskrit, not Tibetan. When we translate it from Sanskrit into the Tibetan term, las, it means action. Then it includes the nominalizer, pa, signifying the person who performs the action. Many Tibetans do not know that the term ‘karma’ comes from the Sanskrit. So when they write it in Tibetan, they use spellings for other Tibetan terms that sound similar such as ‘star’ (skar ma) or ‘white’ (dkar po) instead of the spelling as transliterated from Sanskrit (karma pa).

These fine tales of those with marks of fame,
Teach the path of becoming a sugata.
Those who lack faith will gain faith.
They will be delighted with dharma tales.

His Holiness emphasized that “the Buddha said, ‘all those with faith will be delighted’.” Gyalwang Karmapa elaborated:

His Holiness concluded by describing the interconnection between faith and liberation stories. The main point is that liberation stories reveal the great qualities of liberated beings. Since beginners must rely on faith and devotion, liberation stories show great beings’  qualities such as little desire or attachment to the world, intelligence as scholars, experience and realization as meditators, and how their deeds on behalf of the teachings make a lasting imprint.

Part 2 – The Homage in Good Deeds

For the second part of his teachings, His Holiness directed our attention to the text Good Deeds. Mikyö Dorje’s liberation story recounts thirty-three of his different good deeds. His Holiness rhetorically asked and replied, “What is a good deed? A good deed should be understood as a virtuous act.”

Sangye Paldrup, a direct disciple of Mikyö Dorje, wrote a meaning commentary on Good Deeds with an outline of three main sections of the text as follows:

For this teaching, His Holiness covered the first topic. Regarding the first section it is divided into two parts, paying homage to great beings and the pledge to compose, as seen in the verses:

To those with unrivaled compassion—the Three Jewels
And gurus—I pay homage with respect.
Great beings would see nothing wondrous here,
But some childish beings might enjoy these words.
A few high masters have encouraged me
By saying that it would be meaningful
If I recounted some of my good deeds.
Since I know best what I experienced, I’ll relate a few.

Among the first of these two parts is paying homage to the great beings; the text states:

To those with unrivaled compassion—the Three Jewels
And gurus—I pay homage with respect.

His Holiness explained the meaning in general terms. Mikyö Dorje is paying homage to the Three Jewels and the gurus. He is prostrating to them. What are these three jewels and who are the gurus to whom he pays homage? The Three Jewels refers to the Buddha as described in the Mahayana – a buddha with the nature of the three kayas. The Dharma means the truth of cessation, freedom from attachment, and the truth of the path which leads to freedom. The Sangha is the irreversible noble beings with the qualities of awareness and liberation. The basis for that is all them, is all glorious gurus.

Gyalwang Karmapa noted, “The homage is extremely important.” Generally in Tibet, all authors begin texts with an homage to the buddhas, bodhisattvas, and gurus. The purpose of this is to prevent any obstacles to writing or completion of the text. As His Holiness explained, Good Deeds begins with prostrations, offerings, and praise because Mikyö Dorje’s greatest aim was to protect all sentient beings from endless suffering now and in future lifetimes. Writing his autobiography depended upon  favorable conditions including the kindness and great compassion of the Three Jewels and the great lineage holders.

His Holiness then turned to the second of these two parts – the pledge to compose. This comprises five different points:

For the expression of modesty, we see the line:

The meaning of this line is that the great beings are already free from delusion about what should be done or rejected. Great beings would not feel amazement since they have already reached nirvana and omniscience.

The second point of these five is – How this is for the faithful and receptive. This relates to the line:

Childish beings refers to the ordinary individual, in particular, those who have a longing for the Mahayana. When they see or hear the story of Mikyö Dorje’s liberation, they might feel faith, develop delight, and train and follow in his example. He is teaching this liberation story specifically for their sake.

The third point is the actual topic. The text states:

If I recounted some of my good deeds.

The meaning is that the author, Mikyö Dorje, will recount several of his good deeds.

The fourth point is refuting that this is inappropriate. The passage states:

His Holiness explained this passage. Here, Mikyö Dorje was neither influenced by the eight worldly dharmas nor is he a charlatan. In fact, the author did not feel that he had to tell this story but his students consistently encouraged him to do so.

The fifth point is dispelling exaggerations and denials. The text reads:

Since I know best what I experienced, I’ll relate a few.

If someone else had written this liberation story, a different author, they might have exaggerated Mikyö Dorje’s qualities. Since his experience of his deeds is only vivid to him, he wrote the text himself.

His Holiness ended the session by elaborating on this. When the students write their guru’s liberation stories, they make too many proclamations and only praise the guru. But when the guru composes his own story, his experience of liberation is clearly recorded, just as seen in the Good Deeds. 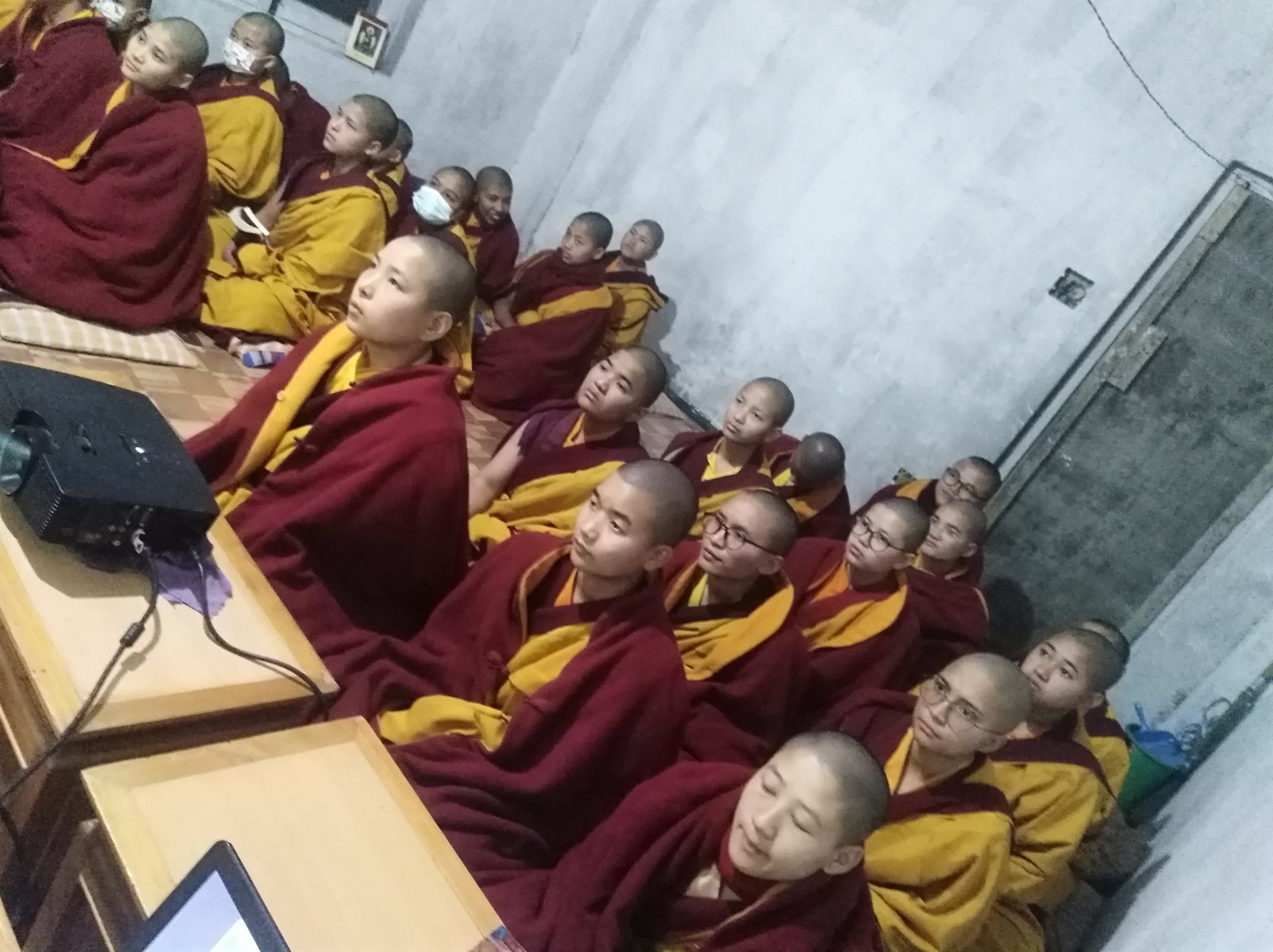