Day 11: How the Three Jewels are the Source of all Happiness

This Lifetime is No Longer than a Cat’s Yawn

After offering his greetings to everyone, His Holiness began the eleventh day of teachings by immediately drawing our attention to the main texts, Autobiographical Verses of Karmapa Mikyö Dorje Called “Good Deeds”and The Praise “He Searched Thoroughly…”. His Holiness pointed out the similarities between the fifth stanzas of both of these texts.

The fifth verse of the Good Deeds:

I saw that everyone high and low must die,
Like a river rushing, naked and empty-handed.
When I reflected, how could thoughts of the eight concerns
Have any chance to arise, even in dreams?
I think of this as one of my good deeds. (5)

This fifth good deed is also the fifth aspect of the preliminaries in the main outline with a primary focus on “giving up on this life because impermanence has taken root in his being.” Gyalwang Karmapa illustrated the similarity between this verse and the fifth stanza from The Praise “He Searched Thoroughly…”

His mind never free from love and pangs of compassion,
His wish for emancipation was utterly pure.
He always despaired of suffering and its causes
And pondered impermanence—to him I pray.

In the Fifth Shamar Könchok Yenlak’s annotated commentary on The Praise “He Searched Thoroughly…”, this verse is about, “transcendent generosity – loving-kindness and so forth – and transcendent diligence of nonattachment and so forth.”

His Holiness elaborated on the meaning of these verses by distilling the main points of Mikyö Dorje’s Instruction on Training in Liberation Stories. He summarized, “If we use our body, speech, and mind for the pointless activities of this lifetime, then that is a really great loss.” He added:

The reason for that is that our body, life, and all of our possessions do not remain for even an instant. They are impermanent and are always changing. Their speed is even faster than the speed of the sun as it rises and sets. We have our friends whom we have known for a long time; there is all the wealth we have risked our whole life to gather; there are our own places and lands. This fully ripened body is used up moment after moment. Because our bodies are always coming to depletion, Mikyö Dorje understood this and had a great feeling of impermanence. He really had an uncomfortable feeling that they were being destroyed by birth and death. Likewise, our body, possessions, entourage, and fame depend upon the results of our past karma. Whatever little time, power, and capacity we have in this lifetime, we need to use it in order to not suffer and to be happy in future lifetimes.

What does it mean to say that the actions of this life are meaningless or pointless? When the great masters of the past say any action done for this life is pointless, meaningless, and ridiculous, it is because they believe in their future lives. His Holiness emphasized that this life is extremely short in comparison with future lives. In fact, this life is no longer than a cat’s yawn. If we lose this opportunity to bring benefit to other lives, then it is a great loss.

Unfortunately, our thoughts are mistaken. Whenever we say all the actions of this life are meaningless, we incorrectly think that this is the saying of someone who does not know how to do anything. It is imperative we train our minds to really know what this means. Why do they say this is pointless? The lamas of the past would look at everything we do as pointless and ridiculous. If we tell a small child who is playing not to play, they will question it, “Why can’t I play? It’s fun, isn’t it?” What the gurus of the past see as pointless, we do not see as being pointless. We are like a small child.

His Holiness shared a great story about two famous Kadampa scholars, Geshe Potowa and Geshe Chökyi Öser. One day the students said to and Geshe Chökyi Öser, “When Potowa teaches Dharma, we have this really different feeling in our mind – a different type of belief or confidence. But when you teach, we do not develop as much certainty as when Potowa teaches. Why is that?” Geshe Chökyi Öser did not immediately answer. He thought to himself, “That cannot be. I know the Dharma better than Potowa does. It is possible that Potowa has some pith instruction.” Yet when Chökyi Öser listened to Potowa teach he also had a different type of feeling. Chökyi Öser asked Potowa about this, “When I listen to you teach the Dharma, you do not say anything I have not heard before. But I understand something I haven’t previously understood.” Potowa said, “What you are saying is true. You know it better than I do, but when I teach the Dharma, I point the arrow inside.” His Holiness clarified that Potowa’s aim was to help the mind. Instead of shooting the arrow outside, he was speaking and teaching with the aim of bringing benefit to the students’ minds. The gurus of the past think everything we do is pointless because we work solely for this lifetime. When we do this, then everything is pointless or meaningless.

His Holiness also drew from Mikyö Dorje’s life story to emphasize this point. Mikyö Dorje homed in upon having good intentions and practice; he abandoned things centered on greatness in this lifetime. Mikyö Dorje became a great lama for everyone because of having bodhichitta.

There were several features that defined Mikyö Dorje’s character and nature. He was quite distinct from ordinary people who only work hard for the sake of this lifetime. Ordinary people work hard to bring profit for themselves and loss for others. Mikyö Dorje had no interest in this and he would say to others that this is pointless and meaningless. He meant this from the depths of his heart. When he saw that people experienced loss or suffering, he had this great feeling as if it had happened to himself. He worried about it greatly. When he heard that people were happy, he would feel truly delighted about this. When he heard talk about gurus or masters in conflict, he would feel a significant loss. When he heard there was no conflict and the teachings were going well, he was delighted and rejoiced that their Dharma practice was going well. He would tell many people about it.

While Mikyo Dorje was alive, many people made offerings, but he did not relish or keep such things. Mikyö Dorje maintained that he would not use his body, speech, and mind for the sake of this lifetime at all. He viewed it as pointless. From a worldly perspective, people might say that Mikyö Dorje just did not know how to do things. At the time of the Seventh Karmapa, the great encampment had been both impressive and extremely influential in dharma and in politics. But much of its influence was lost during Mikyö Dorje’s time. It is possible to say that it was his fault because he did not pay attention to such things. However, if you think about it, His Holiness pointed out, Mikyö Dorje just followed the teachings of the dharma. This is how he was.

Before turning to the subsequent verse in Good Deeds, His Holiness joined the tsunmas in offering blessings and prayers for the longevity of Khenpo Tsultrim Gyamtso Rinpoche on the auspicious occasion of his 87th birthday. His Holiness described Rinpoche’s kindness which extended from the time of 16thKarmapa. Rinpoche not only taught many khenpos at Rumtek but he also taught His Holiness some Buddhist philosophy as well as the songs of Milarepa and Götsangpa.

This is the sixth and last of the verses which cover the preliminary topic of  “Entering the Dharma”—“Going to refuge to the undeceiving three jewels.” The verse reads:

Besides the true protector, the Three Jewels,
No other refuge gave me confidence.
The Jewels know all joys and woes; I had not a whit
Of any dependence or hope in anyone else.
I think of this as one of my good deeds. (6)

In Mikyö Dorje’s Instructions on Training in Liberation Stories, he clarifies that the Three Jewels communicate the meaning of karma, cause, and effect. For instance, some people mistakenly believe that we need to work for the sake of this lifetime or else we will be without the necessities such as food and clothing. However, according to Mikyö Dorje’s view, if we work for the sake of future lifetimes, not only will we have less suffering in this lifetime, but we will also have good things and abundance in this life. The reason is that all the benefit we have comes from protecting others from suffering. If, on the other hand, we do only non-virtuous deeds for the sake of this lifetime, then the more pleasure we get for ourselves, the more harm comes to others. When the karmic results come back, we will experience great suffering. We are so contaminated by ignorance that we fail to comprehend this cycle. The Three Jewels explain this to us and lead us to an understanding of karma, cause and effect.

The basis or source of all happiness in this lifetime is the kindness of the Three Jewels. Once we understand this, we do not go to any other source of refuge. When we have that strong conviction that the Three Jewels do not deceive, even in the face of natural disaster, harm from enemies or severe illness, we will only use the methods taught by the Buddha. We know that there is no other course of action that we need to take. We feel great conviction and know that there is no other way to both protect ourselves and benefit others.

When we really believe in the Three Jewels, we understand that and go forth as monastics.  At the very least,  we will not inflict harm on sentient beings and in turn, others will not harm us. We experience the mutuality of helping one another.  Then the Three Jewels will become the source of all benefit and happiness naturally. However, if instead, we say we are monastics, and we wear thousands of dharma robes but do not give up malicious thoughts of harming other sentient beings, no one will believe that we are monastics or dharma practitioners. Whether we are a good monastic or dharma practitioner depends on our belief in the Three Jewels, karma, cause, and effect. 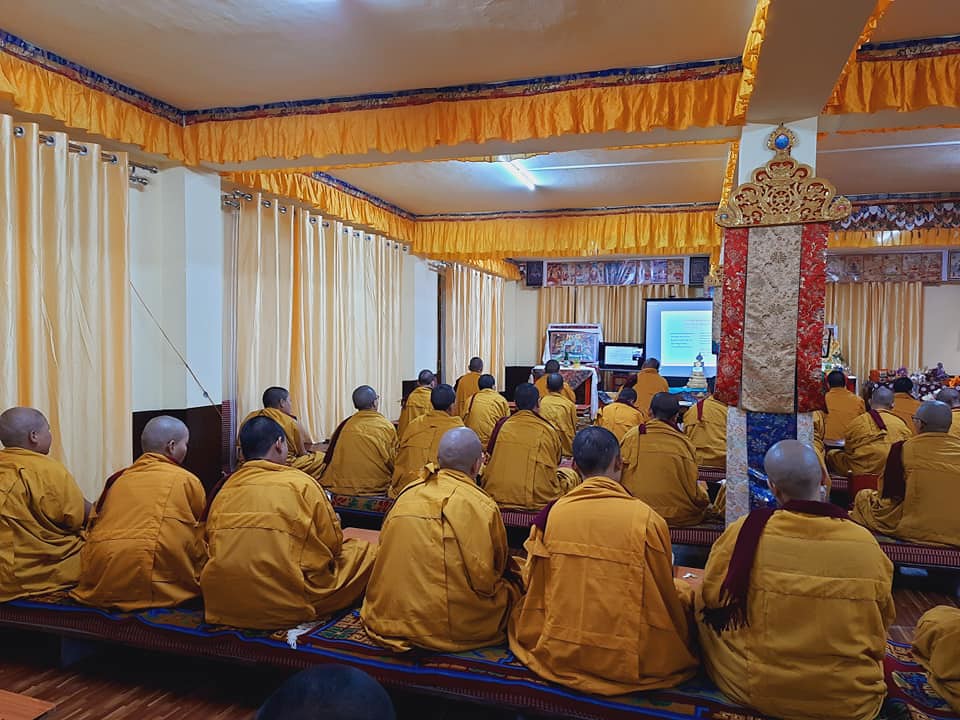