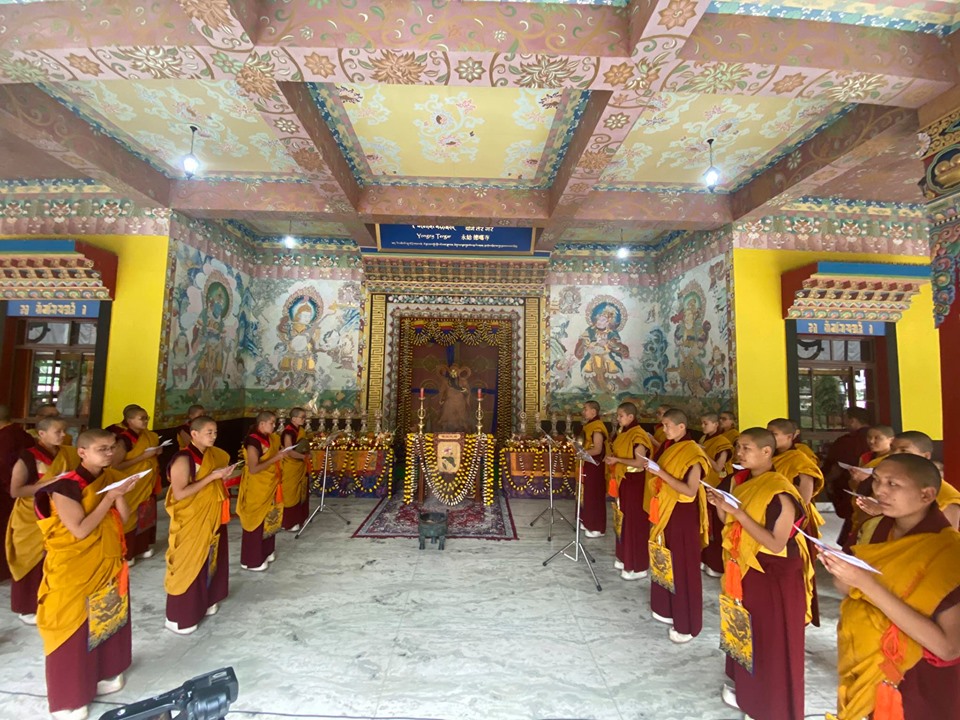 Tergar Shrine Room, Bodhgaya,  February 25, 2020 The Seventeenth Karmapa has revived the Sangharāma Ritual and reinstated it as part of the Losar festivities. The nuns of the Arya Kshema offered the ritual in the morning on the second day of Losar. Sangharāma is a Chinese protector deity, originally called Guan Gong, and temples dedicated to him still exist in China. The story goes that Guan Gong was a Chinese general famous for his bravery and loyalty, but, when he died, he had killed so many people he became a wandering ghost on Mt. Yuquan. After receiving Buddhist teachings, he took refuge and became the Dharma protector, Sangharāma. The connection between the Karmapa lineage and this deity goes back more than six hundred years to the time of the Fifth Karmapa, Deshin Shekpa (1384 – 1415). Karmapa Deshin Shekpa travelled to China at the invitation of the third ruler in the Ming Dynasty, the Yongle Emperor. While he was there, his activities impressed Guan Gong so much that the deity followed him back to Tibet, took up residence on a mountain behind Tsurphu Monastery and became one of the protectors of the monastery. It then became the tradition at Tsurphu to offer a practice to Sangharāma each Losar. Several sadhanas existed, in different Tibetan Buddhist traditions, but when the 16th Karmapa fled Tibet, the Tsurphu ritual was lost. At the age of fourteen, in order to revive the practice, the young 17th Karmapa wrote a new liturgy, a short sadhana using both Tibetan and Chinese, which was performed for the first time at Tsurphu in Tibet. After he came to India, he revised and extended this sadhana calling it Shenchou Zhongming, “The Sound of the Bell in the Land of the Gods.” In 2005, the Karmapa explained his reasons: Recently, there was a wave of national disasters, so I wrote this sadhana of Sangharāma to pacify all obstacles and unfavourable conditions and to increase auspiciousness, peace, and happiness in the world. I also aspired that it would encourage virtue and bodhichitta in beings and enhance the harmony among countries and people. He hoped that “when Sangharāma hears this practice ...a feeling of warmth would come to him, and he would remember his promise to protect Tsurphu.” He composed melodies for the sadhana and also completed several compelling portraits of Sangharāma, based on a dream in which he witnessed the magnificence of Sangharāma. This ritual takes place outside, and not in the main shrine room, so the nuns, dressed in full ceremonial robes, gathered in the portico at the front of Tergar Temple. A statue of Sangharāma, flanked by tables bearing the Seven Articles of Royalty, the Eight Auspicious Symbols, and general offerings, stood in front of the freshly-garlanded main entrance to the temple. ལོ་གསར་ཚེས་ཉིན་གཉིས་པ། སངྒྷ་རཱ་མའི་གསོལ་མཆོད། • Sangharama Ritual • 初二 伽藍菩薩法會